Are students getting their money's worth from student leaders? 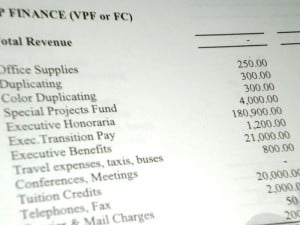 Being a student union executive is not an easy job. It’s (more or less) a full time job that deals with serious issues, with the added pressure of being in the public eye. Balancing the demands of a diverse student population with one’s own beliefs is a difficult task, especially when coupled with fiscal and legal responsibilities.

So imagine how frustrating it must be when somebody like me is sitting across the table, criticizing every move you make and demanding better at every turn.

But when you are getting paid upwards of $30,000 a year like executives of the Carleton University Students’ Association, students have a right to demand better.

And students like myself will, because we care. I care about students, and I care about how my money is spent. That’s why last week I found myself vocally opposed to the CUSA budget, proposed by vice-president finance Meera Chander.

I thought I brought up a pretty good point. The original budget, presented to the financial review committee before the meeting, had a typo – one that meant Chander had an additional $9,000 to spend on behalf of the students. But instead of taking her time and finding the best way to spend that money, she created a $9,000 contingency fund.

I thought Chander owed it to herself and the students to take a little time and review that spending. I suggested we could pass the budget at the next meeting. She’s worked hard on that budget for three months. It hardly seemed fair to make a snap decision on $9,000.

To be honest, I don’t think a contingency fund is a bad idea. In fact, considering how much contingency cash CUSA spent last year during the Ottawa bus strike, it might be a good way to spend that money. But if it was absolutely necessary, why didn’t she budget any money for contingency to begin with?

She didn’t respond to my critique. And neither did any other member of the executive. Not even a council member.

Maybe it’s because the meeting was held late Friday night, and people just wanted to go home. Maybe councillors were genuinely more interested in what was happening on their cell phones. Or maybe they didn’t want to squabble over $9,000 in a budget of nearly $1.9 million.

But whatever the case, they simply didn’t care enough to discuss it. Maybe it would have been different if it was coming out of Chander’s pocket – heck, a $9,000 pay cut would almost bring her down to the average for a student union executive.

But it’s not coming out of her pocket. It’s coming out of mine, and every other undergraduate student who attends Carleton University.

That’s why I care.

I don’t think student executive salaries are too high. But if the average student knew how much student executives got paid, or knew they had multi-million dollar budgets, they might be a little less apathetic.

So I urge students everywhere to consider this question: are you getting your money’s worth?

I am eager to hear your responses.