What students are talking about today (March 11th) 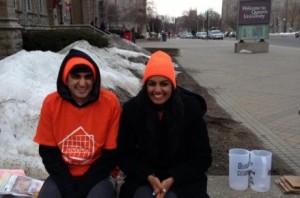 1. Groups of students from more than two dozen universities in Canada are participating in 5 Days for the Homeless, a fundraiser for which students started five nights of outdoor sleeping on Sunday. The initiative has raised nearly $1 million since starting in 2008 at the University of Alberta, according to its website. Different student groups are supporting different charities. Queen’s University students are raising money for the Kingston Youth Shelter, which provides food, shelter and other aid for those aged 16 to 24.

2. Here’s another indication of how gloomy the job market is for new teachers. A task force set up to explore ways to restructure the Bachelor of Education program at the University of Toronto’s Ontario Institute for Studies in Education has recommended eliminating undergraduate teacher training altogether. The one-year program will need to change regardless as all teacher training in Ontario must be two-years long by 2014. The Varsity stresses this is only one of several proposals.

3. Students at Dalhousie University who want advice picking a career have to wait up to two months for appointments. There aren’t enough counsellors to meet the demand and it’s unlikely any will be hired. The Dalhousie Career Counselling Centre, “asks for more money every year, as does every university department that’s ever existed, and they never get it,” reports the Dalhousie Gazette. Access to career counselling is a problem that certainly isn’t limited to Dal.

4. There was a “high-risk takedown” at the University of Waterloo on Saturday, reports The Record, “and although a semi-automatic rifle, a box of ammunition and a Frankenstein mask were all found in the suspect’s car, officers said a 25-year-old Waterloo man facing several charges didn’t intend any harm.” The man was pulled over in his truck at the university two hours after reports of shots in a rural area. He told police it was target practice and the mask was a coincidence. Police apparently believed him, since he was released after being charged, reports The Record.

5. The Gazette at Western University has investigated the use of the ADD/ADHD drug Adderall by students looking for an edge while studying. This story is nothing new. Vivien Chang investigated this in February. Still, reporter Julian Uzielli does a good job summarizing the issues and points out that, surprisingly, it’s not considered cheating to illegally use concentration-boosting pills.

Meanwhile, Shire Canada, the pharmaceutical company that makes Adderall, is being lauded for a new scholarship for students with Adult ADD/ADHD. Scholarship recipients will get $1,500 for tuition and a year’s worth of ADHD coaching. Call me cynical, but this is a transparent marketing ploy. Included in their press release is the claim that approximately 1.5 million adult Canadians are living with ADHD. Imagine that: 1.5 million potential customers!