Bloggers prove that not all students support McGill strike

Union says they're a "small minority" 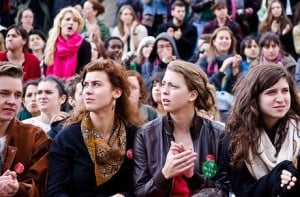 In the war of words between McGill’s administration and MUNACA, the union representing 1,700 support staff who have been on strike since Sep. 1, a new battalion of students has emerged— and they’re fighting for Principal Heather Munroe-Blum.

Since the blog Exposing MUNACA went online Nov. 9, it has been viewed roughly 25,000 times.

The bloggers are physics student Peter Guo and English student Kayla Herbert. Their critique of MUNACA  fills a hole in the public debate, considering that both the Students’ Society of McGill University and the McGill Daily newspaper have sided with the union.

In response to the popular blog, Joel Pedneault, SSMU’s vice-president of external affairs, told the Montreal Gazette today that he will send an e-mail to all students with more “objective” facts. “When they see the conditions at other universities, they will see MUNACA’s side,” he said.

There are sixteen posts on Exposing MUNACA so far. The first attempted to share that tantalizing bit of information that everyone always wants to know: How much do the striking employees make?

The bloggers posted $16.26 as the starting salary. “Picture the easiest job you can find on campus… got it? Yes, you’ll be paid $16.26 per hour for doing just that,” they wrote.

David Kalant, MUNACA’s vice-president of finance, says that the bloggers got that basic fact wrong. The figure is $15.09 or roughly $26,489 for the lowest paid job as an entry-level clerk.

But entering salaries aren’t what this strike is about anyway, he says. Indeed, what MUNACA has argued most fervently is not that $26,489 is too low a starting wage for entry-level positions, but that employees should have a wage scale that increases at a rate faster than the one per cent per year they get now.

So what is their wage scale like now? Well, it would take an entry-level clerk who started at age 23 until nearly age 60 to reach the full pay of just $36,537 (assuming they don’t get promoted). Even workers in the second highest pay bracket (computer coordinators, lab coordinators and nurses), would turn gray climbing from $40,755 starting salary to the $56,214 maximum salary.

But the Exposing MUNACA bloggers seem correct to criticize the union for demanding “parity” with other Quebec schools like Concordia. Consider that Concordia University Support Staff Union employees on the lowest rung start at $13.31 (much lower than MUNACA’s $15.09 to start), and only reach $15.67 after five years, when MUNACA’s lowest-paid members are making $15.84.

The bloggers also point out that MUNACA is asking for a 6.64 per cent wage increase per year over six years—at a time when tuition is rising $325 per year and inflation is just three per cent.

Still, Kalant isn’t worried. “The blog is precisely two people,” he says. “Sure there are going to be some students who disagree with us, but they’re really a small minority,” he argues.

That may be true now. But if Guo and Herbert have their way, that minority will grow into an army.