What students are talking about today (February 19th) 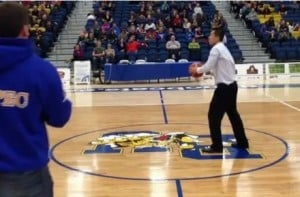 1. Brandon University student Mason Kaluzniak left this weekend’s basketball game with free tuition to his Manitoba school. In the season’s final Shoot-out for Tuition contest he was drawn at random and asked to either take a half-court shot himself or assign it to someone else. He choose to give Bobcats Head Coach Gil Cheung a try, who sunk it and won the big prize for Kaluzniak. The video has been shared around the globe and has more than 1.3 million views on YouTube.

2. University of British Columbia Athletics has mandated sensitivity training for 29 student athletes who participated in the @UBCDimeWatch Twitter account that surfaced in 2012, reports The Ubyssey. DimeWatch posted creepy photos of UBC women—a “dime” is slang for a female with looks that are ‘a perfect 10’—and disappeared after being linked to a hockey player in October. Eight of the 29 were deemed in breach of the Student Code of Conduct and some have been suspended from their teams. Athletics isn’t releasing names, however. Litsa Chatzivasileiou, a gender instructor, criticized that choice. “I don’t understand why there’s so much secrecy behind it,” she told The Ubyssey. “If you don’t publicize this, the broader community still feels unsafe.”

3. Here’s another creepy story. A hidden camera was discovered in a co-ed washroom at Queen’s University’s Victoria Hall on Feb. 13, reports the Queen’s Journal. The camera was disguised as a towel hook inside a shower. It was removed, all other residence washrooms were checked and Kingston Police are investigating. No Secure Digital card was found in the camera and an e-mail to staff said it would be “inappropriate” to disclose whether any images were found by police.

4. Students at St. Francis Xavier University are back in class today after a three-week strike that started on Jan. 28. The tentative deal for staff includes an eight per cent salary increase over four years and improvements to job security and health benefits for part-time contract workers and full-time employees, according to CTV News. The student union is already looking for some kind of compensation for missed time. The deal includes five teaching days added to the school year.

5. The University of Regina has opened 10 gender-neutral washrooms on campus by tacking signs on wheelchair accessible single-stall bathrooms that read: “This washroom may be used by any person regardless of gender identity or expression.” Mikayla Schultz, president of the TransSask Support Services, supported the partly symbolic change. Schultz is undergoing a gender transition and told CBC News that the women’s washroom was never comfortable. Other universities in Canada, including the University of Victoria, have a limited number of gender-neutral stalls.