Break out the bullhorn 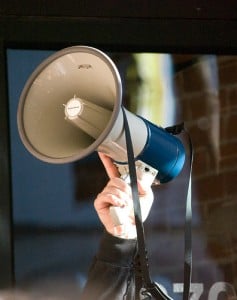 It seems that many Canadian universities each experience their own bout of political fervor and drama during student government elections.

Well, ‘tis the season for hopeful student politicians to hang posters, hand out pamphlets and make speeches in their respective student centres.

After Carleton took the world stage under profound criticism for a badly worded motion to drop the infamous Shinerama frosh fundraiser, Carleton’s student population was looking for a government who better represented them. However, as is often the case with student elections, scandals and subsequent disqualifications plagued what was one of the school’s most anticipated political races.

In the end, the incumbent slate won out the president position, but now shares executive seats with one third of the opposing slate in what was a somewhat anti-climatic finish.

But for those who cared then and care now about what’s going on behind the scene, there is the student paper.

At York University, the Excalibur already has its nose in some potential issues with the newly announced chief returning officer. Casey Chu Cheong will serve again as the York Federation of Students CRO, who also filled this position last year. The YFS board of directors selected Chu Cheong by vote, facing no opponent to gain the title, the Excalibur reports.

As with many schools, the appointment of important election officials who face allegations of bias and friendly relations with current executives or running slates becomes a heated issue that carries throughout the election season. And it is likely, if you’re following the York election, this won’t be the last you hear about Chu Cheong.

Meanwhile, the Fulcrum, the University of Ottawa’s student paper, in a recent editorial, outlines some strange poster campaigning to encourage candidates to run in the Student Federation of the University of Ottawa. The “BE FAMOUS” posters look more suited to American Idol audition calls than to student government, and as the Fulcrum points out, perhaps the road to executive seats is all about the glamour, but maybe it should be about the responsibility these students find in office.

Remembering that students executives not only vie for a slice of the large executive pay pie, but also control hundreds of thousands of dollars in student funds, paid through tuition, these top spots come with a lot of power. While arguably many respectable, rule-abiding candidates have run, many of them have lost as a result of scandal or failed democracy.

While this isn’t the Hill, the results still affect often large student bodies, so for once, a fair student election at a Canada institution would be welcomed. I dare you.

What are your student politicians up to on your campus? E-mail me at jenniferpagliaro[at]gmail[dot]com or leave a comment below.