Students are caught unintentionally plagiarizing all the time. Learn how to stay safe

You’re writing a paper and you find yourself on the horns of a dilemma: if you make up facts that show the world as you think it ought to be, that’s fabrication and you’re guilty of academic misconduct. On the other hand, if you do your research and find the foremost expert on the subject and repeat whatever he says word-for-word, that’s plagiarism and it’s also academic misconduct.

Come on! It hardly seems fair!

Joking aside, plagiarism is easy to commit accidentally, it’s easy for professors to detect, and it can have serious repercussions. Ignorance is no defense against a charge of plagiarism; at this stage in your academic career, you are expected to know what plagiarism is and how to avoid it.

Plagiarism, in a nutshell, is when a student takes someone else’s idea or their way of expressing an idea and passes it off as their own. (This plagiarism stuff is making me nervous. I admit it: I paraphrased this definition from the University of Toronto’s Code of Behaviour on Academic Matters.) 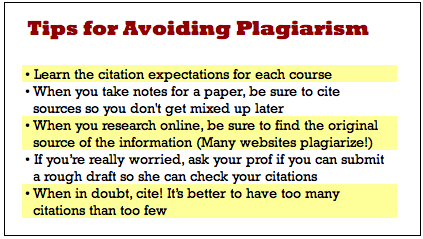 To make things extra weird and complicated, you can also plagiarize yourself if you take things from papers you’ve previously submitted without citing them, because all academic works are supposed to be original.

Why would students plagiarize themselves, or anyone else, for that matter? Most plagiarism is committed accidentally, or out of ignorance.

“Usually it’s because they are not aware of correct citation practices so they don’t include quotation marks, they don’t cite their sources correctly,” says University of Western Ontario ombudsperson Adrienne Clarke.

Citation practices vary from subject to subject and from university to university. There are several styles of citation you may be expected to use, such as the MLA system and the APA system. It is your responsibility to learn the expectations of your professor and your department, and to follow them. Most universities have websites on plagiarism and citation, and if you’re still not certain, ask your professor.

Even if you are aware of expectations, it’s still easy to make mistakes if you’re not careful. Clark gives a scenario of how an honest student could land up plagiarizing a source:

“A student is working on a paper. They have notes in front of them, with citations and page numbers on sticky notes. They are organizing them, putting them down, moving them around. They are taking information from different places and jotting down page numbers and references. And then when it comes to putting the final paper together, there has been some careless note taking, or they have put their stickies in a different order, and written down wrong page numbers or gotten sources confused, so that their final citation list is not correct.”

Alex Gillis, a journalism professor at Ryerson University, has also seen mistakes made by students with chaotic notes. “Get organized so that later you don’t inadvertently plagiarize by thinking ‘That’s a great sentence I wrote’ when it’s actually from the Village Voice or something.”

Yes, improper citation, committed with the best of intentions but without much attention to detail, is plagiarism, and could be considered academic misconduct. When you’re taking notes, it’s important to keep your sources straight so you don’t attribute the wrong source, or worse, mistake a quotation you jotted down as an original idea of your own.

Another common mistake is not sufficiently changing the wording of a paraphrased passage, Clarke says. This is particularly common among students for whom English is their second language.

“Students often don’t understand what it means to paraphrase. They will change one or two words in a passage or alter it slightly and think that’s sufficient when in fact the paraphrased material is not substantially different from the original.”

If you include a passage that uses the same wording as the original document you’re referring to, it should be put in quotation marks and it should be cited. If you intend to paraphrase, then the passage must be substantially rewritten without changing the original meaning and attributed to the proper source.

Clarke says that that many students inadvertently plagiarize when conducting internet research. Because many websites are laden with links, students may cite incorrectly if they don’t pay close attention to which website or link the information they used came from.

Gillis agrees. “The big mistake is cut-and-paste plagiarism. When you are cutting and pasting, find out not only the URL but where that specific sentence or paragraph came from — there’s tons of plagiarism online.”

Plagiarism is extremely easy for professors to detect nowadays, because of a plagiarism detection database called turnitin.com.

“Professors have always had ways of detecting plagiarism but turnitin.com will flag problematic assignments that may have been overlooked in the past. Your chances of getting caught for plagiarism have increased substantially,” Clarke says.

Turnitin.com compares papers to a database of thousands of books, newspapers and magazines, millions of other student papers and billions of web pages, in order to detect improper citation and give the paper an originality score. It’s not just cut-and-paste plagiarism that is detected; paraphrases with only a few words changed are also pointed out to professors.

Getting busted for plagiarism is no joke. Depending on your university, your punishment could range from a verbal reprimand to being given a zero on the assignment or on the whole course. Repeat offenders can be suspended or even expelled from the university.

If you find yourself in serious trouble, you might want to contact the office of your university’s ombudsperson or your students’ union for help.

For more information on plagiarism and how to avoid it, visit turnitin.com’s education website, plagiarism.org or find your university’s plagiarism website — for example, check out U of T’s and this. And if you’re still confused, go and talk to your professor or TA — they would much prefer to teach you how to cite properly than to go through the rigmarole of academic misconduct proceedings.

Have you ever been caught plagiarizing when you didn’t mean to?

Erin Millar and Ben Coli are writing an advice book about going to college and university in Canada. Have a question about anything to do with university? Email us at straightupguide@gmail.com

FILED UNDER: Academic Dishonesty cheating how to avoid plagiarism Plagiarism