What students are talking about today (March 27th) 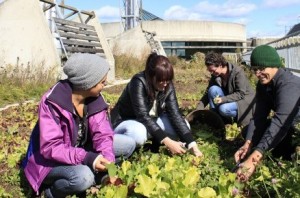 1. Students at Trent University are boycotting Aramark, the corporate campus food provider. They say it’s all about “food justice.” Sustainable Trent and others have given out hundreds of free meals as part of their campaign. “With nutritious vegetarian, vegan, gluten-free, and even local grass-fed meat options, this food is a much-needed remedy for students who struggle daily to meet their needs with Aramark’s limited and often processed selection at its cafeteria,” according to The Arthur student newspaper. This apparently isn’t just about food, but about “the tar sands, the prison industrial complex, and weapons manufacturing.” Who knew?

2. Toronto Police have arrested a 19-year-old from Maple, Ont. following two alleged “indecent acts” at York University. Police report that the same thing happened twice: on March 13 and March 21 the male student, visiting from another school, was in a lab and staring at a female when things turned, umm, indecent. Police say there may have been other incidents. The Excalibur student newspaper reports that York administration had not sent out a security bulletin email to students, as of March 25. There wasn’t a bulletin posted on its security bulletins website either, as of noon today.

3. A gay men’s website in Toronto lists a washroom at Ryerson University as the city’s most popular place to meet and have sex. The obvious reason for its popularity is the location near Toronto’s Gay Village. Some students say it makes them feel unsafe, because non-students are regularly inside campus washrooms. Ryerson Security says they don’t see it as a big problem, nor do they patrol washrooms. Sheldon Levy, the usually happy-to-comment president of Ryerson declined to comment. I can see why.

4. There’s a push from some students at Carleton University to leave the Canadian Federation of Students, an organization they currently send $500,000 to annually in exchange for lobbying and services. There are many reasons students want to quit the CFS, and many reasons others want to keep it. The CFS’s fervent political positions have long been contentious. The Charlatan student newspaper had made a neat map that shows the breadth of that dissatisfaction.

5. Students at Boston College, a Catholic University, are surreptitiously distributing condoms out of dorm rooms. How devious of them! Now, the administration is threatening disciplinary action.