Campus activism is in the toilet (paper)

Students say low-quality loo roll has got to go 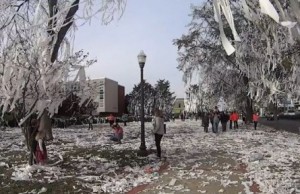 Canadian university students from Saint John, N.B. to Edmonton, Alta. are feeling chafed by the low-quality toilet paper on campus and at least one student union is now demanding action.

The Student Federation of the University of Ottawa’s Board of Administration passed a motion on Dec. 1 from student Daniel Stojanovic calling on the university to “increase the comfort of the average student” by switching to two-ply tp.

Stojanovic wasn’t the first to recognize this consumer-friendly potential policy plank. Tyler Hein wrote in the University of Alberta’s Gateway that one-ply deserves attention from admins:

“I dream about a meeting with our school’s President… I would shed a tear as I explained to Indira Samarasekera the horrors of the backdoor assault that our student body has faced by whoever continues to painstakingly sew barbed-wire into the very fabric of our already incredibly low-quality toilet paper. After I finished protesting this toilet paper injustice, she would look me right in the eyes and say, “Tough shit, Tyler.” This is exactly what I want: Mutual understanding.”

At Brandon University, The Quill recently reported on a change in quality. “I actually have noticed it’s like the thinnest toilet paper I’ve ever used,” said one unnamed student. “Plus it’s impossible to pull it out half the time. So much ends up on the floor and is wasted.” What students might not have noticed was that BU was forced to make about $1.23 million in cuts to its $45-million budget after the Province of Manitoba put a cap on how much tuition can rise and reneged on extra funding. With Brandon’s faculty guaranteed pay raises as part of a collective agreement signed following a 45-day strike in 2011, it’s obvious administrators needed to look elsewhere for savings. Toilet paper is an easily justified cost cutting measure for schools trying to balance budgets.

Earlier this month, someone wrote on the University of Waterloo’s Reddit page that, after paying $10,000 in tuition, they at least deserve two-ply. There was support but also skepticism. One reply: “Have you seen what people do with the existing toilet paper? That’s why we can’t have nice things.”

Indeed, students aren’t great at conserving this limited resource. Just watch what happened to the toilet paper after Auburn University beat the University of Alabama in football last month:

But there is hope for toilet paper activists. After many complaints at the University of Kansas, the school convinced its supplier to sell it two-ply for the same price they had paid for the crappy stuff.