Where smoking is outlawed it does more harm than good 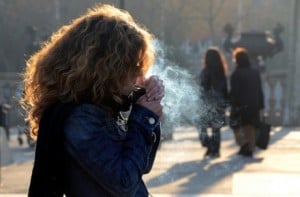 Students at the University of Prince Edward Island are pushing to ban smoking on campus. Cigarettes, they say, are not only deadly for the poor schmucks who choose to light up but also harmful to the non-smoking citizens forced to walk through their carcinogenic clouds. The student union, reasonably enough, wants a plebiscite.

Such bans already exist at a number of east coast campuses, from Dalhousie to Memorial to Acadia. Perhaps something about the pristine ocean air makes them more sensitive to pollution.

I’m not a smoker. I think unwanted cigarette smoke is annoying and gross. Ontario’s government must have polling showing many people feel the same way or they wouldn’t have, just yesterday, banned smoking outside at restaurants and bars. I can think of more useful things for the province to do (for example, working on the deficit) but research has shown that smoke doesn’t easily dissipate outside on patios when people are sitting so at least there’s science behind the policy.

But that’s as far as it should go. Campus-wide bans are pointless, draconian and unnecessary.

First of all, anti-smoking bans don’t work. The prohibition of marijuana in 1923 (for which Maclean’s is partly to blame—we apologize) is having little impact on the number of pot-smoking students. I live beside a college and walk through pungent clouds of pot on my way out the door most days.

Cigarettes are banned too, within nine metres of entrances, but try telling that to the dozens of people puffing right outside the doors under signs warning of fines. I’ll bet the smokers feel safe knowing that security guards and police have better things to do than to try to explain how walking nine metres down the street, where there are just as many people gathered, is somehow safer.

At Dalhousie, where a ban has been in place since 2003, a friend who spent years on that campus tells me she has never heard of it and smoked there all the time without interference. No strangers followed Dal’s advice and “politely” brought the policy to her attention. I’m not really surprised.

I am disheartened though. If you create a ban, you at least need to enforce it. Enforcing rules only occasionally or at the whim of police leads to abuses of power. (Racial profiling, anyone?) It also makes people think they can pick and choose when to follow the rules (see: 2013 Senate Scandal).

When the UPEI Student Union dealt with a push to ban smoking back in 2007, its president argued that forcing smokers to walk off campus for their fix was potentially dangerous (think of the cars! the predators!). A better argument is simply that smokers have rights too and they shouldn’t have to take half-hour study breaks in -20 degree weather when a 10 minute pop outside would do.

Besides, cigarette use is already dropping. In 1999, 22 per cent of Grade 12 students surveyed in Ontario said they smoked at least one cigarette daily, according to the Ontario Student Drug Use and Health Survey. By 2011, only four per cent said they smoked a cigarette daily. Past year cannabis use, meanwhile, declined only modestly over that period, from 28 to 22 per cent. Why is that? I would bet tobacco use is dropping and cannabis isn’t because it’s just not cool to smoke cigarettes anymore while lighting a joint is condoned by everyone from Miley Cyrus to Drake. On campuses where cigarettes are outlawed, they may become more appealing to rebellious youth.

Regardless, such bans do more harm than good. They only punish people who follow the rules.