The Spoke is good, but too expensive to choose every day 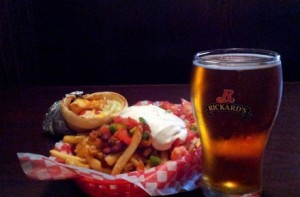 The 2013 Maclean’s University Rankings includes an examination of the dining on Canadian campuses. We found healthier options than ever, but also a new problem—high prices.

Maclean’s On Campus is continuing the conversation by having students review food on their campuses and showing what it costs to dine. If you’re a student, you can help. Send us a review of the food on your campus. Keep your receipts. If we publish it, we’ll reimburse you.

At $7.30, the CLT Combo (CLT stands for Chicken, Lettuce and Tomato) is a tasty option for starving students. The grilled chicken pieces are lightly seasoned, adding a nice touch of flavour. It’s not huge; though it might fill up a smaller person, I’d still be hungry without a side.

Spoke fries have gained a somewhat mythical status around Western—they’re perfectly crispy and not too salty. Other on-campus eateries, like Harvey’s, can’t even compare. I suspect there may be some kind of subliminal, addiction-inducing message hidden in the red-and-white checkered wax paper they’re served on. Add beef chili, tomatoes, onions, green peppers and a generous dollop of sour cream and I’ve got one delicious—though somewhat pricey—dish.

At $5.75, a pint of Rickard’s Cardigan isn’t cheap. Props to the Spoke for offering a seasonal beer on tap, but they’d be better served with a microbrew instead. Although the Cardigan isn’t bad, it tastes kind of like someone just stirred some cinnamon and nutmeg into regular Rickard’s Red.

All in all, it’s a good meal that left me stuffed, but it’s not something I can afford to eat every day.