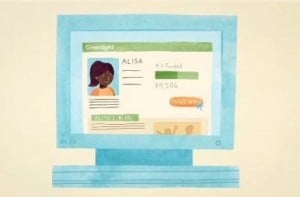 From a Greenlight promotional video

Crowd funding websites, notably Kickstarter and Indiegogo, are used to raise cash for everything from charitable causes to music projects. Recently, more than 60,000 fans of Veronica Mars used Kickstarter to raise nearly $5 million to produce a movie based on the TV show. It was an impressive use of the concept, which involves small amounts of money from many donors.

Such successes raise an interesting question: Can crowd funding be used to pay for university or college? The founders of two Canadian startups—Greenlight and FundUni—believe so.

FundUni, based in St. John’s, Nfld. is the creation of Kyle Hickey and his brother Trevor, who both attended Memorial University. Though in its infancy, FundUni aims to help both current and prospective students launch tuition funding campaigns. It will work like this: participating students will post a video detailing their stories and ambitions. “The more compelling the better,” says Hickey. Students can offer rewards to those who contribute to their tuition funds. For instance, Hickey, 28, says an art school student could offer a painting or art lessons in exchange for much-needed financial support. The brothers are seeking an initial crop of five students to test the concept. They hope to promote the site across Canada within a year.

So far, Hickey says FundUni has generated “very warm responses.” There has been one nagging question, however. Can FundUni be turned into a profitable business? The brothers plan to take a 13-per-cent cut of all tuition contributions. Hickey admits some have questioned the “commercial viability” of that plan. In other words, will there be enough customers?

Adam Awad has other concerns. The chairperson of the Canadian Federation of Students says the emergence of tuition crowd funding is an unfortunate reflection of rising tuition costs. He worries such fundraising efforts will provide governments an excuse to offer students less funding.

Awad also has doubts about the ability of the average student to raise cash. “If you’ve got 600 people in a math program, how do you realistically differentiate yourself from everybody else?” he says. An art student can offer a painting as a reward, but what about students in other programs? “It’s much harder to say, ‘I’ll write you a paper on seventeenth century French history,’” says Awad.

Awad’s concern is reflected in the experience of Jan Walczak, founder of Greenlight, a Toronto-based tuition crowd funding site. Originally, he envisioned the site as a way for high school seniors to pre-fund their post-secondary educations. But early tests revealed that many students were failing to raise money, so he plans to switch the concept: contributors will donate money to schools and school districts, but not to individuals. That cash will then be divided between all the Greenlight-registered students in the school or district. In other words, everyone can get a piece.

Walczak plans to soon launch a beta version with 15 students. So far, however, he’s found it difficult to sell the concept to students, parents and donors. “A lot of people support it, but actually getting them to act on it is much harder,” he says. “There’s definitely been a lot of failure up to this point,” he added. “That’s why we’re constantly trying to shift and learn from what we’ve been doing wrong.”