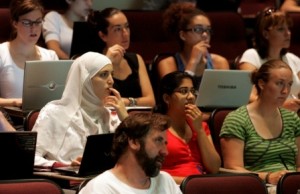 Photo by Ian Barrett for Maclean’s

Researchers have created what they say is the first ranking of countries from best to worst at providing higher education. The report is from Universitas 21, a network of research-intensive universities whose Canadian members are McGill and the University of British Columbia.

The ranking followed a detailed examination of 48 countries using 20 metrics, including both input and output measures (see below). Each nation’s score is a percentage of the winner’s score, which was automatically 100. Here are the top 20:

Universitas 21 explains their methodology this way:

Research authors at the Melbourne Institute of Applied Economic and Social Research, University of Melbourne, looked at the most recent data from 48 countries and territories across 20 different measures, grouped under four headings: resources (investment by government and private sector), output (research and its impact, as well as the production of an educated workforce which meets labour market needs), connectivity (international networks and collaboration which protects a system against insularity) and environment (government policy and regulation, diversity and participation opportunities). Population size is accounted for in the calculations.