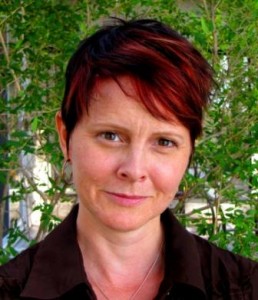 In 1986, to recognize the importance of university teaching, the Society for Teaching and Learning in Higher Education and 3M Canada created the 3M National Teaching Fellowships. Ten university faculty members are recognized each year for their educational leadership and exceptional contributions to teaching. Here we continue our series profiling all 10 of the 3M Teaching Award winners, with a look at Lisa Dickson, an English professor at the University of Northern British Columbia.

When Lisa Dickson talks about literature, it is hard to imagine her being anything but an English professor. “Literature is important. It can change the world. It can change how you see,” she says. But her career path was not always clear. In high school she had her heart set on studying medicine in university. “I was going to be a doctor,” she says. And, before that she had toyed with joining the Canadian Forces but reasoned her frame was not built for combat.

Despite her enthusiasm for science, however, her biology teacher bluntly told her, “You’ll never make it as a doctor.” Though she was initially “crushed,” a turning point came when she volunteered to be a peer tutor for her high school English literature class.

When she realized she was actually helping other students get past their frustrations with the material, something switched. “It was like a watershed moment for me,” she says. She was hooked on English.

While at the University of Guelph, Dickson recalls how her friends pursuing science degrees would head to the lab at 2:00 am just to get a spot, while she stayed home, wrapped in a blanket, reading King Lear. “What could be a better way to spend your life than that?” she asks.

Perhaps because of her earlier experience as a peer tutor, Dickson encourages her students at the University of Northern British Columbia to learn from each other, with a heavy emphasis on group work. For example, when teaching Shakespeare, her area of specialization, students don’t just read the plays, they perform them. “It gives students that chance to get in there and see how things work,” she says. “It can create situations where students can explore ideas together.”

Dickson always remains firmly in control of her classes, guiding students as needed, but she continues to experiment with giving them more authority over their own learning. Last spring, she taught a course on Hamlet that crammed 13 weeks of teaching into five days. Working in groups, students discussed the text, selected scenes from the play to perform, and critiqued each other.

Over the course of the week, Dickson gradually removed herself from the process, and by the fourth day, students were entirely on their own. The students “were over the moon with this idea,” she says. “They were terrified at the beginning, but by the end of the course, they felt this gave them the opportunity to really test out what they had learned.”

One of those students was William Henderson, who says “everyone that took that class became passionate about Hamlet.” He also describes Dickson’s reading of a particular passage as “very powerful.”

Dickson has been on sabbatical for the past year, but while most professors would use that time solely for research—that is what sabbaticals are for after all—she has continued her committee work on improving first-year education in the arts and social sciences at UNBC.

The Hamlet class was an “experiment” in active learning that Dickson hopes can be tailored to some degree or another to all levels of undergraduate teaching in the English department. “It can kill literature if you’re just standing at the front shouting ‘this is really interesting, you should be interested,’” she says.

Dickson’s commitment to Shakespeare is undeniable. As is her devotion to the scholarship of teaching and learning. But even serious academics have guilty pleasures. Dickson’s weakness? Science fiction. In her spare time, she pens novels in the genre, though she writes under a pseudonym. “Like a ninja, I work only under the cover of darkness,” Dickson says.

Her interest in all things spacefaring does have an academic angle as well. In 2006, she edited a book on the long running Canadian-American series Stargate SG1 that explored themes such as nationalism, politics and gender roles within the show.

Dickson is also an amateur tap dancer. At a final exam she was giving for her third-year English theory course, she opted to perform a routine for students. One student, Rachelle Durand, remembers that day fondly. “She slipped and fell in the middle of her routine. She laughed and was unhurt. This was a great memory,” Durand says.

Whatever her side interests, Dickson’s passion is for teaching: “Undergraduate education is important because it helps to scaffold and structure that moment in a student’s life as they move from home out into the world.”