Lincoln Alexander was chancellor at University of Guelph 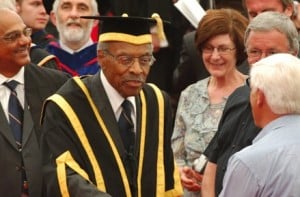 The man known to all as “Linc” was a “living legend” in his hometown of Hamilton and a man whose life and career were “a series of groundbreaking firsts,” Onley said in a statement.

“At a time when racism was endemic in Canadian society, he broke through barriers that treated visible minorities as second-class citizens, strangers in their own land,” he said.

“Lincoln Alexander’s whole life was a rebuke to those who would equate ability with skin colour,” Onley added. “He overcame poverty and prejudice to scale the professional and political highs.”

Alexander served as Ontario’s lieutenant governor from 1985 to 1991 — the province’s first black vice-regal — among his many accomplishments.

Born in Toronto in 1922 to West Indian immigrants, Alexander served with the Royal Canadian Air Force during the Second Wold War, from 1942 until 1945.

He received a Bachelor of Arts at McMaster University in 1949 and graduated from Toronto’s prestigious Osgoode Hall Law School in 1953. He was appointed Queen’s Counsel in 1965.

That year, he was appointed Ontario’s 24th lieutenant governor. He held the post until 1991, focusing on youth and education.