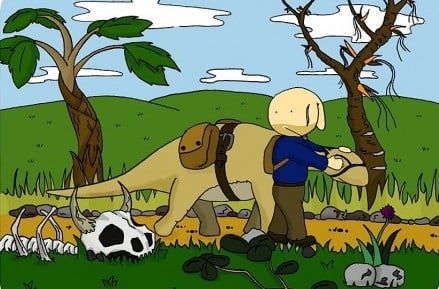 One fond memory of my undergraduate days is of reading the comics in the student newspaper. They lacked the artistry of professional comics in the big dailies but they had a certain joie de vivre that came with, presumably, not getting paid very much (if anything at all).

Since then I have followed university comics mainly when they get involved in controversies, as when the UPEI student newspaper was confiscated by university officials after it published the notorious Danish Mohammed cartoons, or when a community college ran a comic in which Barack Obama looked a bit like a monkey, or when the Saskatchewan student paper ran a comic, reportedly by mistake, showing Jesus in, shall we say, a sexually compromising position.

But browsing student news sites the other day, I became curious as to the state of university comics, so I went looking and found that the tradition was alive and well, and even better than I remember. In fact, I was so impressed that I am inspired to provide my entirely subjective, online-only list of the top five university comics in Canada. Here are my picks.

Samuel provides us with quite charming one-off panel cartoons, of the sort one finds in The New Yorker—and provides fewer head scratchers than that redoubtable mag.

Ski Ninjas feels like it could have been called Little Orphan Anime. I admire the strong lines and the simple off-beat humour, as in this strip where the joke is essentially that “booze” is a funny word. Which it is.

3. Too Fancy Gents, by Mike Hayes and Amani Elrofaie*, Western

Too Fancy Gents gives us the dialogue of two Oscar Wilde-esque fellows called Monocle and Bowler (perversely, Monocle wears a bowler, and Bowler wears a monocle). Typically our gents (who really are too fancy) sound awfully posh but quickly veer off into accounts of their sexual escapades or drug-fuelled misadventures.

I must admit, I don’t think I always understand Eshelman’s Caveman Agent (which feels a bit like Ziggy if Gary Larson had drawn it, with a dash of Krazy Kat for flavour), but the drawing is fantastic and the artist manages to catch his main character (is Cavemen his name?) in oddly human moments, as in this panel where he tries to keep his dinosaur from being traumatized.

This one makes me slightly regret my one-winner-per-university rule, though, since York provides several other worthy candidates, including Adventuresome by Keith Maclean, and the very clever Sent from the Moon, by Alison Wight. Let’s call those very honourable mentions.

Glamour Pig is a largely text-based comic with admittedly sketchy drawing, but has just the sort of skewed viewpoint that gives us a new perspective on life (as in one comic where Johnson lists some of the downsides of eye glasses: “Impossibility of repair should damage occur in post-apocalyptic future.”). This is the kind of comic that makes you feel like you have a cool new friend.

If I have missed any worthy candidates, please feel free to link to them below. Meantime, campus cartoon artists: don’t stop now!

*We initially failed to give credit to Amani Elrofaiem, the illustrator behind Too Fancy Gents. We regret the error. Additionally we initially listed Ski Ninjas as Sky Ninjas. This post was updated Jan. 14, 2011.