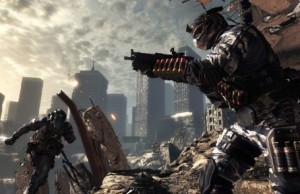 OTTAWA – Video simulation, including commercial, first-person shooting games such as Call of Duty, will play an increasing role in the Canadian military in the coming years.

But a tug-of-war is underway between skeptics who see video as a mere cost-cutting tool, and soldiers who regard the technology as a welcome addition to the existing training regime.

National Defence is examining how computer-generated scenarios boost ordinary training, and for the first time is considering their use in mission rehearsals.

“That’s something that’s being seriously looked at,” Brig.-Gen. Denis Thompson, head of special forces, said in an interview with The Canadian Press.

Before almost every major operation, troops carry out rehearsals to test the strengths and pitfalls of various battle plans. It’s a practice that goes back at least to the First World War.

Whether storming full-sized mock-ups of targets, or taking notes based on sand models of the battlefield, preparation has until the last two decades been decidedly low-tech.

Computer simulations have changed that to the point where dozens of troops and even pilots can be linked to together in a virtual world, which includes realistically rendered enemies, right down to uniforms and faces.

Thompson stressed the technology does not substitute for the rugged dress rehearsals soldiers carry out before operations, such as commando raids and anti-terrorism missions.

Sophisticated simulators are already familiar within the army and air force, seen in part as a way for units to save on bombs and bullets as the military cuts up to $2.5 billion from its budget by 2015.

“There is a natural tendency to use simulation as a replacement tool for actual boots on the ground training,” says a Feb. 1, 2012, briefing note, obtained under the Access to Information Act.

“Simulation has been put forward in many instances as a cost saving measure; for example, the cost of a 105 mm round is too expensive so we will train in a simulator and drastically reduce live fire practice.”

“Simulation must be approached with a view that it speeds the learning process and lends itself to improving soldier performance to conduct actual tasks, not replaces them in a synthetic environment.”

Simulators currently in use in Canada’s military include the Joint Combined Arms Training System and the Virtual Battlespace 2. In the latter, all the elements of large-scale virtual battles, such as tanks and helicopters, can be linked together.

“I think all of that stuff is useful, and we’re not shy about using it,” Thompson said.

“But I will re-emphasize that it does have to finish with a guy with a full magazine of live rounds, doing the business, in close proximity to all of his friends, with live targets. There is no substitute for that.”

First-person shooter games can also be effective in training team leaders to move soldiers to the right locations, he said.

The technology also teaches lessons of past battles. Just as some video games recreate scenes from the Second World War and other conflicts, military programmers have incorporated at least two scenarios from Canada’s five-year ground war in Afghanistan into their systems.

Thompson wouldn’t say which Afghan battles are being refought in the virtual world, but said they are realistic down to the uniforms of the Afghan army and police, as well as American forces.

“We can walk people through what happened,” Thompson said. “We use those vignettes to teach people what can happen on a direct action.”