Find out why some students are opposed 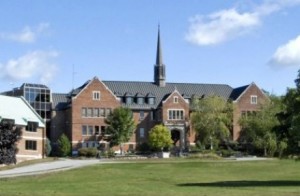 Back in first year, I remember realizing that the hardest part of university isn’t the lab reports, the chemistry midterms, or the 1000-word essays.

It’s when they’re all due within three days of each other. Before you can even begin learning the material, you must learn how to juggle five course’s worth material that always comes due at once.

That problem could be eliminated for future students at tiny Algoma University in Sault Ste. Marie, Ontario, which is debating switching to a block plan where students would be taught one course at a time, rather than five at once.

The block plan looks like this. A semester’s worth of calculus is compressed into three and a half weeks, with classes taking three or four hours each day, followed by four or five hours of homework. After a few weeks, there’s an exam. Then students move directly to the next course.

A block plan doesn’t mean less or more work. It just means students can concentrate on one course at a time. According to a recent executive report on the possible switch, short bursts of intensive learning lead to greater retention and motivation, while promoting “social engagement and learning communities.” Translation: the benefits extend beyond the classroom.

And it’s difficult to fall behind. “The block plan gets [students] working from day one. They have finals in three weeks. They have papers due in week two. They have to focus on one subject right away and there is no time to fall into bad habits,” president Richard Myers told Sault This Week.

Considering all the supposed benefits, it might seem surprising that the Algoma University Student Union (AUSU) is opposed. But here’s why. A block plan curriculum is equivalent to a 40-hour work week, which makes it less flexible for part-time and mature students who are already working.

That’s an especially big roadblock for Algoma, which has a student body that’s much older than average and has a very high proportion of part-time students—29 per cent in 2008-09.

Lance Thunder, the president of AUSU, says that he thinks a block plan is a great way to learn, but he also thinks “[Algoma is] already doing very well as is.” Enrolment is increasing at a healthy rate, and it scored well on the 2011 National Student Survey on Engagement (NSSE).

He also has concerns about the price of implementing a block plan. It would cost an estimated $2 million just to make the switch. “We would have to increase the faculty by an additional 20 to 30 per cent, which in itself makes the changes very challenging,” Thunder says, adding that the costs would go “beyond what we could afford right now.” If that leads to rising tuition, would it be worth it?.

Quest University is currently the only Canadian university that uses a block plan university-wide. It works well there. In the National Survey of Student Engagement, Quest scored much better on almost every measure than almost every other Canadian school. President David Helfand attributes that to the block system. To read more about Quest’s remarkable success, click here.

But tuition at Quest is $28,000, with a total estimated cost of attendance of $40,000 per year. That makes it very different from Algoma University with tuition and fees of about $6,500 per year.

Of course, it doesn’t have to be all-or-nothing. Some schools have piloted a block plan for specific programs, like geography at the University of Northern British Columbia. That could inform how Algoma approaches its possible switch. “This may be a fruitful model for us to consider as well: converting to the block selectively, in those programs that find it advantageous,” said Myers. A block plan could be used for full-time students, with conventional courses for part-time students.

Those are the types of things Algoma’s senate will need to sort out before voting next year. What’s clear that block plans aren’t for everyone. But for at least some students, it could be the perfect answer to the age-old dilemma: “Do I cram for my histology exam or start that eight-page anthropology essay?” That alone makes it worth consideration.