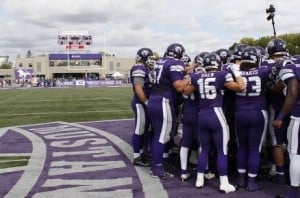 Football at Western U. (Jessica Darmanin)

Fans of university sports learned Wednesday about a new six-year deal between Canadian Interuniversity Sport (CIS) and Rogers (which also owns Maclean’s) that will bring games to more viewers on Sportsnet and The Score’s television, online and mobile platforms through to 2018-19.

Football’s Vanier Cup, which will be held on Nov. 23 in Quebec City, is one of 13 big events scheduled for the upcoming season, along with men’s and women’s hockey and basketball championships. The rest will soon be announced.

Andrew Bucholtz of the blog Eh Game sees the deal as a logical and positive partnership, writing:

The Canadian university basketball and hockey championships (both men’s and women’s) will be a far better fit on Sportsnet and The Score than on TSN, and when considered as an overall picture, this makes a lot of sense for CIS. It’s very beneficial that CIS basketball’s now in a place where it will be taken seriously.

Pierre Lafontaine, Chief Executive Officer of CIS, sounds excited too. He said in a press release:

“This expanded, long-term partnership with Sportsnet will help elevate the CIS brand and provide our 11,000 student athletes, 700 coaches and 54 member institutions the recognition they deserve. It will serve to shine a light on the many outstanding accomplishments of our student-athletes who will move on to become future leaders in this country and around the world.”