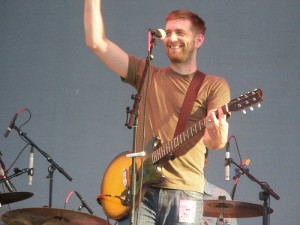 With news last week that Cat Power is bankrupt and was forced to cancel a set of tour dates, the need to support independent artists—both large and small—is more apparent than ever. Here are five shows worth supporting this week:

1. Toronto’s art rockers The Darcys are ambitious. Their cover of Steely Dan’s Aja is a testament to that, as is their current tour which showcases their reinterpretation of that moody record. With only three Canadian dates, their Nov. 9 appearance at Zaphod Beeblebrox in Ottawa is a must-see. Info here.

2. After a break up, a make up, and a handful of international music festivals, Death from Above 1979 are back on the road with new songs. The dance-punk duo play Oxygen in Moncton, N.B. on Nov. 9. Ticket info here.

3. After gaining notoriety as the lead singer of The Weakerthans, John K. Samson branched out on his own with the record Provincial. The talk-singer, who is the current writer-in-residence at the University of British Columbia, plays the Chan Centre on campus on Nov. 9. More info here.

4. A trio of terrific folk acts including Andy Shauf, Evening Hymns and Julia McDougall, who releases an EP that night, will play Regina’s Artful Dodger on Nov. 11. More info here.

5. Relatively fresh off the release of Scrappy Happiness, Joel Plaskett Emergency teams up with Sean McCann for a string of Canadian dates. If you’re willing to shell out the $35 bucks, see the band in Corner Brook, Nfld. on Nov. 10. More info here.

Sick of citing sources and hours in the library? John K. Samson’s hears you loud and clear, even if you’re not yet a masters’ student. Check out the video for When I Write My Master’s Thesis: