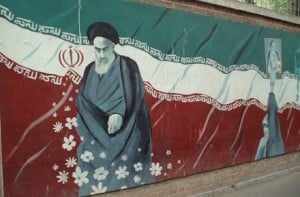 Republished from Michael Petrou’s The World Desk blog on Macleans.ca

The conference, “The Contemporary Awakening and Imam Khomeini’s Thoughts,” was held to commemorate the 23rd anniversary of the death of the Islamic Republic’s founding dictator, Ayatollah Ruhollah Khomeini. It was presented by the Cultural Centre of the Islamic Republic of Iran, which is run out of Iran’s embassy on Metcalfe Street, and the Iranian Cultural Association of Carleton University. Iranian students at Carleton in the past have contacted me to complain about attempts by the Iranian embassy to influence their student group at the university.

The conference featured a talk by Moulana Sayyid Muhhamad Rizvi, the “Guidance Alim” of a Toronto Islamic school whose teaching materials—some of which which were written in Iran or by a foundation believed by the FBI to be controlled by the Iranian government—refer to “crafty” and “treacherous” Jews.

Rizvi told the conference that Khomeini “proved that Islam is not just a religion of prayers and personal laws that only deals with matters of divorce and inheritance, rather it is a complete code of life that can govern all aspects of society—spiritual, material, as well as personal, social, economic and political aspects.”

Press TV, the Islamic Republic’s English-language television propaganda arm was on hand to mark the event. Press TV puppet Hamed Mousavi informed viewers that Khomeini’s “influence and inspiration have extended beyond Iran,” noting the supposed impact Khomeini’s ideas have had on recent popular uprisings in the Arab world.

Other speakers included Kurt Anders Richardson, at the University of Toronto’s Trinity College, who said Khomeini “was the one who emphasized the equality of human beings, the equality of male and female.” This revelation is likely news to millions of Iranian men and women, and would have been news to thousands of more, if they hadn’t already have been tortured, raped, and murdered during Khomeini’s reign and its violent and ongoing aftermath.

In an interview with Maclean’s after the conference, Richardson said he has received a lot of criticism from Iranian émigrés in Canada since making those comments and said he had based them on Khomeini’s writings, rather than his actions. Richardson says he was invited to the Ottawa conference by a diplomat at the Iranian embassy with whom he has an established relations pertaining to Richardson’s regular visits to Iran as part of his research in comparative theology. Richardson says the Iranian leadership is engaged in a larger effort to show—as Press TV dutifully parroted—that Iran’s Islamic Revolution inspired the Arab Spring and that its spirit motivates even various “occupy” movements in Western capitals.

Richardson says he is aware that his presence at Tehran-sponsored conferences may play into Iranian government propaganda efforts but says he’ll run that risk as long as he’s not censored: “I will make the choice in favour of maintaining my relationship, as long as I have the freedom to speak from a critically religious perspective.”