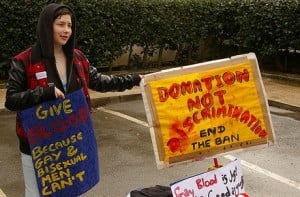 Students at Carleton University voted this week to continue refusing to work with Canadian Blood Services because of the organization’s policies, which prevent most gay men from donating.

I, for one, applaud the students’ decision.

To ban all men who have had sex with other men, even once since 1978, is going too far. It excludes numerous healthy donors, generates ill will among citizens generally, and, worst of all, promotes the false and damaging stereotype that being gay is equivalent to being diseased and vice versa.

Why not? Because then there wouldn’t be enough donors. In the case of gay men, however, we are dealing with a small fraction of the population, and Blood Services knows it can do without them. But discrimination against a small group is still discrimination. In fact, it’s the most common kind.

Other advanced countries—South Africa, Australia, New Zealand, Japan—have more reasonable policies on blood donations from gay men and have not had a massive outbreak of STDs.

It’s time for Blood Services to change their policies. Attempts to convince the organization have not worked. What will work is a widespread boycott. Straight people across the country need to say, if you want my blood, you have to accept the blood of my healthy gay friends.

And universities are a good place to start.