Prof. Pettigrew: We neglect our great truths at our peril. 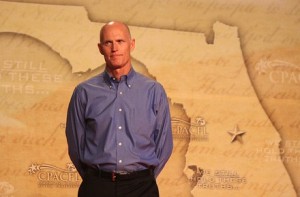 Another day, another attack on the liberal arts.

This time it’s the great state of Florida, where governor Rick Scott’s task force suggests that university students enrolling in so-called STEM fields (Science, Technology, Engineering, and Math) should pay less tuition than those enrolling in arts programs. That arts programs cost less to offer, is, apparently, besides the point. That not everyone is interested in or has the aptitude for science (never mind math!) seems irrelevant too.

But worst of all is the facile presumption, stated once again by influential government advisers, that the main function of a degree is to qualify the graduate for a job in the knowledge economy.

I have frequently used this space to argue for, and not, I hope, whimper too much about), the importance of the arts both in the world of work (where they valuable communication and critical thinking skills) and beyond (where they help create informed, thoughtful citizens). And I know I’m not alone in this. Check out Nannerl Keohane over at The Chronicle of Higher Education earlier this year, or Victor Hanson at the National Review. Nevertheless, legislators and bureaucrats scarcely bother to engage any of these claims. They give a curt “of course the arts matter” and then go on speaking and acting as if they don’t.

Consequently I am starting to feel like the mythical Cassandra. In case you are from Florida, let me explain. Cassandra was beloved of Apollo who wooed her—as only a god can—by granting her the gift of prophecy. But when Cassandra rebuffed his advances, Apollo got his revenge—as only a god can—by cursing her so that no one would ever believe her prophecy.  Later, when she tried to warn Agamemnon of his impending murder, he did not believe her, and ended up dead in his bathtub.

If those of us defending the liberal arts are so many Cassandras, futilely pointing out how much will be lost without the critical thinkers and writers we train, those in power are playing out a better known story from antiquity, the myth of Midas. Remember that Midas was given the apparent gift of having everything he touched turn to gold. But such a gift was simultaneously a curse, since the foolish king could not eat, hold his loved ones, or, really, do anything with real value.

Midas learned the hard way that money isn’t everything. And that’s why his story—and that of Cassandra—are so valuable. They remind us of the timeless truths of humanity. Sadly, and ironically, these truths that will be lost if today’s politicians get their way. Because everyone who could have taught them will be too busy mindlessly contributing to the knowledge economy.