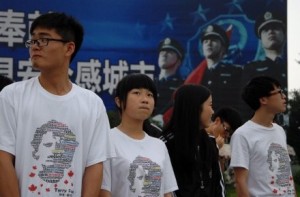 It’s a muggy afternoon in June and high school students wearing T-shirts stamped with the image of Terry Fox stride past towering high-rises and scooters with honking horns in this small Chinese city that’s been coated in haze from the local fiberglass factory for several days.

For most, it’s their first time making the fundraising trek that’s annual tradition half-a-world away in a country where they yearn to attend university.

Teachers at Grand Canadian Academy, a private school certified to award British Columbia diplomas, hope the early Terry Fox run will ease cultural integration for students who have perhaps only visited Canada once before.

Yet the teenagers don’t hesitate to draw contrast between how the hero from their prospective new country might have fared in their rapidly-developing homeland.

“If Terry Fox ran on the road (in China), the traffic jam would stop him,” says Gr. 12 student Vera Zhang, 19, in newly-acquired English.

“I think maybe he would have died more early — because of the dirty environment,” adds her classmate Sally Zhou, also 19.

Zhang has been accepted into the business management program at the University of B.C. (Okanagan campus), while Zhou — who designed the T-shirts her peers are wearing — will attend Toronto’s York University to take fine arts.

But while these soon-to-be international students from mostly affluent Chinese families have put in vast hours of not only academic study but preparatory efforts for a smoother transition to life in the West, statistically it’s expected most from this school will return home again with their highly-regarded Canadian degrees.

“It’s about success and it’s about progress,” says principal Bill Ironside, noting English is the second language of business in Asia.

“They are well-positioned to get hired by good companies and do good work in back in China.”

“Not like here, it’s very dirty and polluted,” she says.

The 18-year-old plans to apply to Montreal’s McGill University, where she hopes to study management so she may become a “businesswoman” who will most likely return to China to take the reigns running her parents’ sweater factory. That would free them up for other possible ventures, such as opening a hotel.

“I want to learn in Canada but not move (there),” she says. “My parents and I think Canada has an advanced education system and a different way to educate. They pay attention to practice, but in China it’s too many theories.”

The mandate of Grand Canadian Academy is to prepare its students for that Western style of learning. The curriculum is taught by six qualified Canadian expats.

Although they offer a well-rounded lesson plan, they all recognize they must instruct as English-as-a-Second-Language (E.S.L.) teachers first, says Ironside, who is a former high school vice-principal from Collingwood, Ont.

The school is housed in two floors of the 3,445-student high school campus of Mao Dun Zhong Xue, located about a 30-minute bullet train ride southwest of Shanghai, on China’s central east coast. It is among 41 off-shore B.C. schools, 32 of which are in China.

The academy was opened in 2005 by a private Chinese businessman who lives in Mainland B.C. The company is based in Hong Kong and teaches grades 10 to 12. Currently, students earn B.C.’s Dogwood Diploma by studying Canadian curriculum during the day and their Chinese diploma via more classes after a dinner break. The school day starts at 7:15 a.m. and ends at 9:40 p.m. All students must pass a rigorous application process and pay tuition to attend.

“It’s such a brave thing for them to do, to come in when they are 16 years old and learn science in English, math in English,” Ironside says. “They are pretty resilient, pretty motivated. They’re developing a skill-set to work with a whole new culture. The nuances, the body language, the colloquial way of speaking.”

Arielle Fraser, a tall blonde who is currently the school’s only female instructor, draws perpetual stares and hollers from the locals whenever she leaves campus.

She says her biggest obstacle has been getting her hands on Canadian content in a nation where the government bans YouTube, Twitter and Facebook. But with the help of her Internet savvy students, she has managed to incorporate such Canuck mainstays as Stompin’ Tom Connors, episodes of the early 1980s TV show Degrassi and current events in which students read about recent controversies involving Toronto Mayor Rob Ford.

Fraser took three weeks to prepare her students for the standardized exams that account for 20 per cent of all B.C. high school students’ grades in specific courses. Obscure cultural references aren’t familiar to students who grow up outside Canada, she explained, giving the example of an exam question mentioning an athlete swimming across Lake Ontario.

“If they haven’t studied Canadian geography, they’re not going to have any idea what a feat that is,” she says. “Or, if it’s a story about Native Americans living on a reserve and somebody mentions moccasins … they may be totally clueless.”

Next year, the staff anticipates further challenges after new guidelines came down from B.C.’s education ministry making it mandatory for off-shore students to pass those exams in order to pass the course.

“I’m a little bit grumpy about that,” says Ironside. “I think there is an inherent unfairness. This is sensitive, but why does my student have to pass it but a student in Coquitlam or Vancouver or Victoria doesn’t?”

There are other tangible differences instructors teaching the same classes in Canada wouldn’t expect, says Eric Cooper, a University of New Brunswick grad, who has worked at the academy for four years. Students must bring their own toilet paper and hand soap to school, while classes often run on Saturdays to make up for a mid-week, government-mandated holiday, which has usually been announced last minute.

“It’s two systems that are trying to work together,” Cooper says. “There are sometimes culture clashes, but they’re not super serious.”

Grade 11 student Hope Huang is among the few keen to score high grades specifically because he’s adamant about permanently leaving China to gain a better quality of life.

“Here, maybe I can make money or have a good car or something else, but I think in Canada (I will) enjoy the environment,” says the 17-year-old, who wants to study psychology at Simon Fraser University.

“Maybe I can have happiness.”