What students are talking about today (March 22nd) 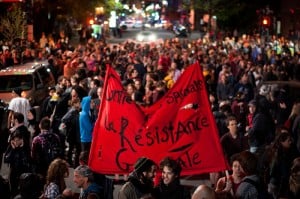 1. Chris Bangs, front-runner for president of the Students’ Society of McGill University, has been accused by student journalist Ameya Pendse of the Bull & Bear newspaper of refusing to answer questions about about the time he allegedly forced his way into a lecture banging on drums and shouting slogans at those who went to classes during the so-called student strike. The incident was caught on video. Pendse says he posted this query twice on Bangs’ Facebook page: “When you decided to go into that room and disrupt the class, after the strike failed, do you think that you went against a student’s individual choice and right to go to class?  Don’t you feel like you disrespected the students’ choice and opinion concerning the strike?” It’s not exactly as balanced question, but it’s one that Bangs apparently deleted twice. In a Reddit “Ask Me Anything,” question and answer session, he again dodged it. He also failed to give a comment to The Political Bouillon student journal. Why no answer?

2. Also at McGill, a student writing in the online magazine Leacocks says that, looking back, she shouldn’t have complained about her residence room in Montreal or the unimpressive flat she rented on exchange in Ireland. “What I’ve failed to appreciate is that even living in a flat on a street where every sidewalk slab boasts the blot of an ostensible Rorschach test from the stains of dried urine, I didn’t live on those streets. I lived in an apartment—a secure, cockroach-free one at that, with a kindly landlord, and situated in a cool foreign locale where I’d jetted for the year to study (kick around, travel, get into dark beer, etc, etc). And my parents paid the rent,” writes Kristen Pye. I’m not sure if we should love her or hate her for only realizing this now, but she certainly has a point.

3. Members of the McMaster Muslim Students Association are upset that their prayer space is going to be demolished and that a temporary accommodation may be in portables in a parking lot 1.5 kilometres from campus. “We were clear about our requirements—that the [new] space needs to be carpeted. It needs to be a large, accommodating area that’s accessible to campus in order for Muslim students to pray there. Surprisingly, the space we were given is anything but that,” MSA executive member Amina Khan told The Silhouette student newspaper. Because devout Muslims pray five times a day, they say this proposed new location is unacceptable. I can see why it would be inconvenient and hope a mutually agreeable solution can be found, but I have to ask, since when is a supposedly secular public institution required provide prayer space?

4. The wage gap between university graduates and high school graduates shrunk between 2000 to 2011, according to a new report from Statistics Canada. Here’s the highlight: “The narrowing of the gap was associated with a shift in labour demand towards industries, such as mining, oil and gas extraction, and construction, which are less intensive users of highly-educated workers.” However, it’s important for readers to understand that average wages for bachelor degree graduates are not declining, they’re simply growing slower. They’re also still 30 per cent higher on average than what high school graduates get, Rene Morissette, of Stats Can, told Western University’s The Gazette. Read more about the future of jobs in Canada here.

5. University administrators, at least those from the U15, a group of 15 big research universities, are happy with Thursday’s federal budget. “In a time of financial constraint, this government has prudently chosen to maintain funding to the crucial innovation sectors that will help generate solutions to our pressing social and economic challenges,” U15 President Amit Chakma, (also president of the University of Western Ontario), said in a statement. They applaud $37 million for granting councils, $165 million for Genome Canada, $141 million in new money for the National Research Council and $23 million over two years for the International Education Strategy.