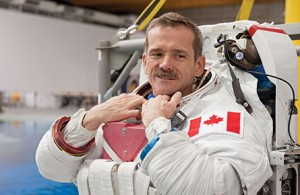 WATERLOO, Ont.  The former Canadian astronaut who gained a global audience with his musical performances in space will be taking on a new job as professor of aviation at an Ontario university.

The University of Waterloo says Chris Hadfield’s first task on campus will be assisting research into why some astronauts get fainting spells when they return to Earth—knowledge it says will also be useful for elderly people prone to falling.


The school on Tuesday announced the appointment of the guitar-playing ex-astronaut, who retired in July shortly after getting back from five months on the International Space Station.

During the mission, Hadfield became the first Canadian commander of the space station and performed more than 130 science experiments.

He also earned millions of Earth-bound fans through social media with his dramatic photos, tweets and a slightly reworded cover of David Bowie’s “Space Oddity” that became a popular YouTube video.

It was believed to be the first music video made in space, according to NASA.

The university says Hadfield’s first public appearance at the school will be at a special guest lecture Dec. 3.

It expects he will take on some teaching and advising duties in aviation and similar programs beginning in the fall 2014.

The university says Hadfield, 54, has a long history in Waterloo, earning a postgraduate degree at the school and marrying his wife there, while Hadfield’s eldest son was born in nearby Kitchener.

Hadfield had a 21-year career as an astronaut and his recent journey on the International Space Station was his third trip to outer space.

He was the only Canadian to visit the Russian space station Mir in 1995, and the first Canadian to perform a spacewalk when he installed Canadarm 2 in 2001.

Hadfield has called his career the culmination of “an incredible adventure” that began when he was a nine-year-old dreaming of flying in space.

Born in Sarnia, Ont., and raised on a corn farm in Milton, Ont., he became a military pilot before being selected in June 1992 as one of four new Canadian astronauts.

Hadfield has been working on a book that will offer stories, lessons and experiences from his time in space. “An Astronaut’s Guide to Life on Earth” is due out later this month.