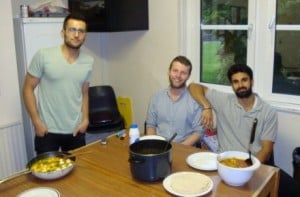 At the University of Oxford, it is customary for students to wear red flowers on the lapels of their (decidedly Hogwartzian) exam robes during the final stretch of testing season. But this year, for Shozab Raza, a flower wouldn’t cut it. The 23-year-old originally from Saudi Arabia opted instead to pin a square of red fabric to his breast—un carré rouge, as it is known in Quebec, where it is recognized as the symbol of the province’s recently tepid but ongoing student protest movement, now in its fifth straight month.

Just days before exams, Raza helped foment a debate amongst his peers at Oxford’s St. Antony’s College, one that has erupted into a divisive squabble over the very identity of student councils at the fabled British university. The fracas flared from a motion put forward by Raza and his friends at a council meeting on May 31, requesting the college send £750 (nearly $1200) to the CLASSE, Quebec’s most numerous and radical striking student union. The money was meant to help pay the legal fees of protesters arrested under Quebec’s controversial protest crackdown law, Bill 78.

“There’s a perception globally of Oxford as a traditionally conservative place,” says Raza, a bespectacled graduate student in anthropology, sitting in a café in Toronto, where he is living for the summer. “We hope to in some ways disturb that conception.”

During the past school year, Raza and two other students named Joe Hayns-Worthington and Parmir Gill have been doing just that. All year, they’ve turned up at sparsely-attended meetings of the college’s GCR—a graduate student council—where they introduced a motion to support the politics of the Oxford Radical Forum, a left wing discourse group. They also pushed for approval to send funding to the students of a nearby school who were demonstrating against tuition hikes.

Even though both proposals were voted down, the trio’s jockeying sowed tension with the student politicians at the college—the five executives of the GCR—who were uncomfortable discussing political initiatives at a forum typically reserved for decisions relating to backyard barbecues, high teas and other, mostly social matters of student life. The GCR at another Oxford college, for instance, recently voted to spend £2,200 on a Diamond Jubilee garden party.

As things got underway at the May 31 meeting, the chair of the council—from whom political discussions at previous meetings had provoked profanity-laced outbursts—stepped down from the post he had held for five years and walked out of the room. But not before announcing that the motion to support CLASSE was illegal; under UK charity law, groups like the GCR cannot donate money to political causes, he said. Then, the council president, another student named Jason Robinson, proposed a motion to strike the CLASSE proposal from the agenda. This was defeated by the 35 to 45 students in attendance, says Gill. That’s when things got more heated.

“It was poisoned,” says Gill, a 22-year-old graduate student in economic and social history. “From that point on, I was on toothpicks, just hoping that everything remained calm and amicable.”

It didn’t. According to Gill, Hayns-Worthington and Raza, what followed was an impassioned debate over the legality of the motion, the place of politics at the student council and the worthiness of the CLASSE cause.

In the end, those in attendance approved the motion to send money to the CLASSE. Once the vote was tallied—18 to 15 in Gill’s recollection—any semblance of agreeability in the room “degenerated,” says Gill. The GCR treasurer, apparently fearful that she had just broken the law by overseeing what she believed to be an illegal motion, broke into tears. Robinson, who declined to comment on the matter, grew red-faced and stormed from the room as the meeting was adjourned, Gill recalls. “The commitment that we had to civility, and handling disagreement with a smile—all that went away,” he says.

In the weeks since, the approved motion has been sent to a committee, which is deliberating on whether it is permissible for the student council to financially support the CLASSE. This procedural brouhaha continues, with both sides offering impressively detailed objections and rebuttals on the particulars of the issue.

From an outside perspective, the intensity of this debate might seem ridiculous. But for Raza, still wearing his red square in Toronto, taking up the CLASSE cause at Oxford is worthwhile, even if it stokes controversy. He believes donating money to the protesting Quebeckers is all the more meaningful if the funds come from such a prestigious institution.”Oxford has symbolic resonance,” he says.

He has a point. The thought of robe-wearing Oxford students paying the legal fees of arrested Quebec protesters—well, that’s just rich.