What students are talking about today (March 7th) 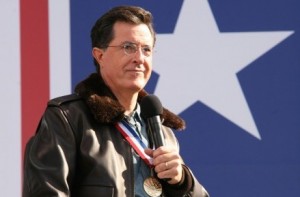 1. Washington Post has compiled a list of this year’s famous U.S. college commencement speakers. It’s bound to make Canadian students jealous. The speakers include President Obama, Cal Ripken, Jr., the Dalai Lama, Oprah Winfrey, Joss Whedon (of Buffy the Vampire Slayer and The Avengers fame) and Drew Houston (the co-founder and CEO of Dropbox). Best of all, the University of Virginia has landed Stephen Colbert for their May 18 graduation. The fake Republican newsman and comedian has done this before. In 2011 he spoke at his alma mater, Northwestern University. Here’s a sample from the full text via the Chicago Sun-Times: “Northwestern’s academic resources are unparallelled. The library contains five million books, and 100,000 periodicals, none of which anyone reads because they’re not on an iPad. Next year I believe Deering Library is being converted to a Chipotle.”

2. Why is it that student politicians so often think it’s their job to limit access to whatever it is they don’t like? Bottled water, for example, has been banned at numerous Canadian campuses because of its environmental impact. I agree that bottled water is bad, so I don’t buy it very often, but the bans do little but force people to buy it off-campus or drink—gasp—Coke. Earlier this week Ryerson’s student union decided to “reject” clubs that believe in misandry, the entirely reasonable concept that, just as some people hate women (misogynists), some people hate men. Today it’s Nicole Tupechka, vice-president student life of the Students’ Association of MacEwan University, who wants to ban something. Well, not quite ban, she says, but “reduce the visibility” of energy drinks on campus. She wants to “encourage good habits” and “set students up for success,” by having fewer machines, she tells The Griff student newspaper. It’s true that energy drinks can be unhealthy, but they’re not exactly heroin. Why not let students decide for themselves?

3. Friday is International Women’s Day. Alexandria van Dyck writes in The Uniter out of Winnipeg, “for many of us young feminists, fortunate enough to have been born after our foremothers’ struggles reshaped the possibilities available for people of all genders, we are out of touch with a broader feminist movement. That, I think, is where our March 8 celebrations come in. International Women’s Day is an opportunity for us as feminists to connect, perhaps for the first time, with a broader community of people who are standing in solidarity in the fight for gender equality.” Meanwhile, feminists will be pleased to learn that four new Equity Studies courses, which focus partly on gender, will be offered in Ontario high schools this fall, reports Western News.

4. A paid women’s soccer coaching position has been axed from the University of Calgary, reports 660 News, and it’s the third U of C women’s varsity team to lose funding. This reminded me of a recent article in The Sheaf that reported on how 408 of 480 head coaches of Canadian Interuniversity Sport teams are male. Tom Huisman, director of operations and development for the CIS, told The Sheaf that he “does not agree” there is gender inequality in coaching at CIS—despite those obvious numbers. Happy International Women’s Day, female athletes. Or maybe not.

5. The University of Saskatchewan is considering an architecture program. Travis Homenuk writes in The Sheaf that with a projected budget deficit of $44.5 million by 2016 and recent layoffs, it’s bad timing. I guess that would depend on whether architecture, as a professional program, would cost the university money. After all, professional programs charge students a lot more than undergraduate programs. Tuition to Saskatchewan’s dentistry school, though obviously more expensive than architecture would be, is $32,960. Perhaps architecture could pay for itself?