What students are talking about today 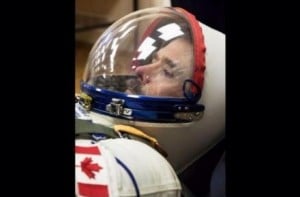 1. Space flight isn’t usually enough to impress Gen Y., so it’s encouraging to see ISS and Chris Hadfield trending on Twitter as our guy lifted off for the International Space Station where he’s the first-ever Canadian in charge. The coolest Tweets of the past 24 hours were from @Cmdr_Hadfield himself, particularly those with photos. “It takes these 32 engines to get these 3 humans safely above the air. And that’s just the start,” he wrote along with one incredible shot. He also Tweeted things we maybe didn’t want to know: “Enemas and Barf Bags – the less glamorous side of spaceflight :)” Here’s the full pre-liftoff round-up.

2. The Facebook “compliments page” trend is picking up speed. More than 100 schools have a page where people can anonymously compliment one another. It’s compelling to read. The trend has been noticed by everyone from Time to the Zimbabwe Star, but it all started at Queen’s University. Jessica Jonker told Queen’s News Centre why she and her roommates started the project in September: “While it’s common to equate anonymity with negativity and cyber bullying on social media, we wanted to encourage the Queen’s community to share kind words for one another.” The copycat page at the University of British Columbia’s page has 5,100 likes.

3. Here’s something less happy, though it could encourage positive change. An hours-long gang-rape and near-fatal beating of a 23-year-old student on a bus in New Delhi by six men has triggered outrage across India, from the streets to parliament, reports The Associated Press. It’s reaching Canadians too. Denise Balkissoon ?@balkissoon, a Toronto journalist, made this point Twitter: “Last wknd’s horror has Delhi calling for fast-tracking rape trials. In Toronto, I’m covering one still in preliminaries, 2 yrs aft charges.” Justice, when it does come, is often so too slow.

4. The University of Calgary has published the travel expenses of top administrators following a Freedom of Information Request from the Canadian Taxpayers Federation. President Elizabeth Cannon’s bills to the end of September total approximately $68,000 for trips to Brazil, China, Germany and Austria. The CTF seems to think that’s too much, but Bonnie DuPont, the university board of governors interim chair, pointed out the institution has raised $228.6 million since Cannon took over as president in 2010. For a university president trying to build a global brand, $68k doesn’t seem like too much to me.

5. Vancouver isn’t used to getting much snow (trust me, I lived there), and yet most of the universities are open today despite a big storm overnight. Prominent UBC economist Kevin Milligan ?@kevinmilligan Tweeted his support for a snowday “Buses can’t get up the hill to #UBC. @translink. This is on 10th at pt Grey. Hear it. Is the same on 4th. #snowday ?” Simon Fraser University’s campus on Burnaby Mountain is closed. UBC is open. Take that UBC.