Concentration for $5 a pill 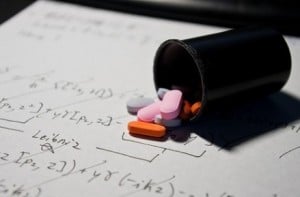 Like many before him, John* took what he was told was the drug Adderall without recognizing its potential side effects. “I had been studying at the library for days, my concentration was diminishing and my friend was like, ‘there’s this guy that has Adderall,'” the University of British Columbia student says. He bought some.

He’s not the only one. The illegal use of the amphetamine-based prescription drugs, which can improve concentration, may be an epidemic on campuses across North America. It’s the equivalent of steroids in baseball. The student who can study longer has an edge over peers.

Legally prescribed to treat attention deficit hyperactivity disorder (ADHD), many university students without the disorder have found ways to obtain the medication, either through campus hustlers or by faking ADHD symptoms. According to one estimate, a staggering 30 per cent of students at the University of Kentucky had abused Adderall. Though extensive research has not been undertaken in Canada, it is estimated that up to 11 percent of post-secondary students have used the drug.

It’s easy to see how the drugs are accessed in the U.S. Experts say they’re easily prescribed. An article in this week’s New York Times revealed that five million Americans currently take Adderall for ADHD and prescriptions to those aged 20 to 39 have increased 141 per cent since 2007.

Dr. Patricia Mirwaldt, Director of the Student Health Service at UBC, says Canada has arguably tougher guidelines for diagnosing ADHD. Mirwaldt explains that she and her colleagues use a holistic approach to ADHD, evaluating potential patients’ histories and the results of two surveys.

But even when students don’t obtain legal prescriptions, it can be easy for them to purchase Adderall from peers. John estimates that most students are just a few degrees of separation away from someone who has access to study drugs. He says, “you just have to know the right people.” The going rate for pills at UBC is $5, he says. The clandestine exchanges are surprisingly casual.

But he’s no longer a fan. After taking two to three capsules of what he was told was Adderall each day for a week, warning bells sounded. “I felt like my brain was fried. I wasn’t getting any exercise, nor was I eating or sleeping properly.”

Dr. Pierre-Paul Tellier, Director of Student Health at McGill University, knows the negative effects these drugs can have on healthy students. “Students are relying on a variety of stimulants to stay focused,” he says. “For the average person, it can actually make [concentration] worse, because they can get very anxious, very hyper, and in fact [unable to] concentrate on their studies.”

Others in the medical community say the drug should actually be prescribed as a study aid. Dr. Derryck Smith, an expert on ADHD, is among them. “We’re much better off having these prescribed by doctors than having people get them on the internet or from their friends,” he told CTV News.

As midterm exams approach, there is little doubt that many students at UBC will once again take study drugs to try and gain competitive edges. John, however, says he won’t be one of them.

*John is not this student’s real name.