But is it a good use of tuition money? 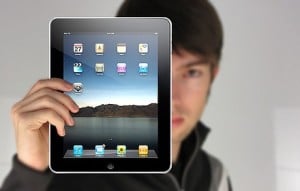 Concordia University’s library will lend out iPads to students starting this month. OpenFile Montreal reports that the library has acquired 25 of the tablet computers and they’re almost ready to go.

Concordia, like many schools, lends out laptops. That’s undoubtedly a useful service for students who want to do research in the library instead of carting home a pile of books. And not everyone can afford a laptop, so this improves access.

But while a number of American university libraries lend out iPads to students, Concordia is the first university in Quebec to do so. Some universities, including nearby McGill, offer e-readers, but iPad lending appears to be rare in Canada. The only other example I can find, using an (albeit non-exhaustive) Google search, is at York University’s Steacie Science and Engineering Library. They have a single solitary iPad to lend.

I know libraries are trying to keep pace with changing technologies, as Guylaine Beaudry of Concordia’s Webster Library argues in OpenFile. But I think lending out iPads is little more than a novelty. I can’t imagine it’s much easier to take notes from a book on a tablet than on a traditional computer. And why would you want to read an e-book when you’re surrounded by real books? I know digital course-packs are the way of the future, but are Concordia students really going to be studying on their borrowed iPads—or just playing?

Don’t forget, iPads cost money. For each one purchased, schools can afford to buy fewer laptops.

I asked my roommate, an English literature student at Concordia University, what she thinks of the idea of borrowing an iPad from the library. She replied with indignation: “I hope my tuition isn’t paying for that.” A fun as iPads may be, I have to agree with my roommate.