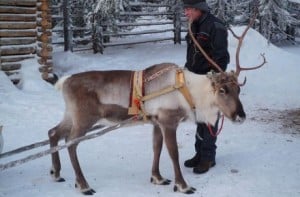 For Concordia University biology professor Robert Weladji, reindeer are more than a Christmas mascot; they’ve been his research focus for the past decade. Nadia Kherif of Concordia explains:

His recent co-authored paper, published in the European Journal of Wildlife Research, examines how young orphaned reindeer fare in the wild and shows that hunting new reindeer mothers may have negative consequences for the herd.

As human appetite for reindeer meat and pelts grows, young calves are increasingly being separated from their mothers. Explains Weladji, “a common by-product of hunting is orphaning of calves in autumn. Despite this, there are few studies that evaluate the fate of orphaned calves.”

With the help of colleagues in Norway and Finland, Weladji closely examined two herds of reindeer. Both herds consisted of females with and without calves at heel, as well as with orphaned calves. The researchers measured survival and distances between mothers and calves, as well as between adult females and orphans within the herds.

They found that all females survived the winter, and there was no evidence of weight loss for females once their calves had been weaned. When it came to the calves, winter mortality rates were negligible and did not differ between orphans and non-orphans.

While that seems to indicate that the hunting of adult female reindeer does not have a negative impact the herd, Weladji and his colleagues also found that non-orphaned calves lost less mass and stayed closer to their mothers when compared to the distance between orphans and adult females. The non-orphaned calves were therefore better equipped to deal with threats of predation and frigid winter conditions.

Explains Weladji, “this suggests that harsher winters may mean increased mortality for orphaned reindeer. Reduced mass loss in non-orphans is most likely due to mothers sharing and defending feeding resources and protecting their offspring from harassment by other herd members during their first winter.” Other benefits of mother-offspring bonding potentially include maternal protection against other reindeer and predators, as well as transfer of knowledge from mothers to calves, such as learning the distribution of key habitats and resources, and where to seek cover.

This means that hunting reindeer herds in which females have calves at heel may have unintentional demographic side effects. In order to ensure continued viability of reindeer herds, meaning Rudolphs and Vixens for generations to come, hunters should be extra careful to avoid females with calf at heel when choosing their prey. That doesn’t just apply to reindeer, whose primary habitat is in Norway and Finland but also to the caribou that roam the Canadian tundra, as well as to other northern and temperate ungulates, such as deer and moose.