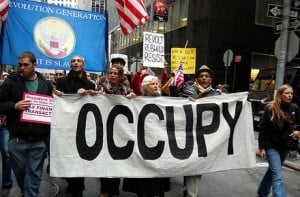 Students at Columbia University in New York are being offered a course that requires most of those taking part to work with the Occupy Movement.

Appel is described on Columbia’s website as a post-doc “with research interests in the daily life of capitalism and the private sector.”

She told the New York Post that, “Inevitably, my experience will color the way I teach, but I feel equipped to teach [the course] objectively.”

Unlike Canada’s Occupy movement, which has moved out of city parks, New York’s occupiers have continued to gather publicly. In fact, 68 protesters were arrested at or near Zuccotti Park on charges of trespassing, disorderly conduct and reckless endangerment on New Year’s Eve.