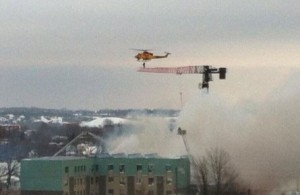 KINGSTON, Ont. – A 68-year-old construction worker stranded atop a crane at the centre of a massive fire in Kingston, Ont., was “severely burned” before a military helicopter was able to navigate smoke and leaping flames to airlift him to safety.

Adam Jastrzebski, who had burns to his hands, legs, back and buttocks, was recovering in hospital Wednesday after his dramatic rescue a day earlier, said his employer at Canadian Professional Crane Inc.

“He’s in severe pain right now in the hospital and they’re giving him morphine,” said Aram Malek, who had been to visit Jastrzebski.

“I’m just surprised no one got hurt more than that because the fire was enormous.”

Firefighters from neighbouring communities had to be called in on Tuesday afternoon to help Kingston crews battle the flames which had engulfed an apartment building that was under construction.

A crowd watched from the streets as the crane operator got out of his cab, crept along the boom of the crane to its very edge and waited to be rescued by a team from CFB Trenton.

Although help arrived quickly, Malek said his employee, who has 35 years of experience as a crane operator, had been in a tough position.

The military crew which carried out the rescue knew they were dealing with an extremely precarious situation.

“I wasn’t concerned with our safety, I was concerned with the crane operator himself,” helicopter pilot Capt. David Agnew recounted Wednesday. “I was just imagining with being in the fire for the last couple hours that the crane could fall at any time.”

Sgt. Cory Cisyk, who was lowered down to the crane to fit the stranded worker into a harness, said Jastrzebski appeared calm.

“There was a little two-foot platform at the end of this crane that he was laying down on, sort of curled up on,” Cisyk recalled. “I was trying to tell him ‘I’m going to get you out of here’ and asking if he was hurt. He was answering me and I don’t know what exactly he was saying. That’s just the situation we were in.”

Meanwhile, authorities focused their attention Wednesday on the charred crane which towered above the still-smouldering remains of the building at the heart of the blaze.

“Right now our biggest risk is having that crane in its current condition,” said Kingston fire chief Rheaume Chaput. “It’s been impinged by fire and is in a damaged condition. So we want to make sure we make that safe, get that down.”

Authorities created a cordoned-off “collapse zone” to ensure no one would be hurt if the crane came crashing down, said Chaput, adding that engineers had been called in to determine just how unstable the metal structure had become.

“We estimate that the fire intensity there was probably about 1,000 degrees, so if it was that hot then it changes the makeup of the steel,” he said. “We don’t know how brittle or how safe it is, so we don’t want to take any chances.”

Crews were hoping to be able to take down the crane in a “controlled environment” before it gave way or was brought down by heavy winds, said Chaput.

Firefighters also continued to douse hot spots that remained in the debris of the apartment complex where the blaze began.

“You have areas of the building that have collapsed upon themselves and in between them there’s fire and we’re not able to get at it with the water,” Chaput explained. “It may smoulder for another day.”

The blaze, which forced more than 150 people from their homes, was so intense that surrounding buildings had their windows blown out, a duplex and a hotel were destroyed, and vehicles caught on fire.

While the cause of the fire was still under investigation, questions were being raised Wednesday about the structure of the five-storey building where the blaze began, although officials said it was being build according to code.

“Ideally there’s better construction methods out there,” said Chaput, adding that the incident could be examined through the province’s building code committee.

Kingston’s mayor also expressed his concerns but said there was little the municipality could do.

“It is completely the jurisdiction of the provincial government and the Ontario building code to determine what materials are used from a structural standpoint,” said Mark Gerretsen.

The mayor added that his primary concern was caring for residents displaced by the fire.

“What I saw … was nerve-racking,” he said. “I am extremely grateful that nobody was seriously injured in this.”