What students are talking about today (February 15th) 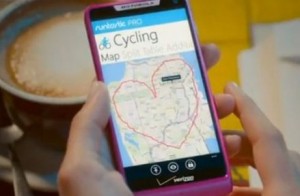 1. Toronto’s Payam Rajabi had to leave his girlfriend Clare behind when he moved to San Francisco for a job, so on Valentine’s Day he did something extra special for his long-distance love. NPR reports that he “jumped on his bike, opened his iPhone to a map of San Francisco, and tracking himself with a GPS, he rode 27 miles around the city, taking 2 1/2 hours, burning 1,135 calories and carefully etching a heart shape onto a city map.” After his bike shop shared the story, Verizon Wireless called and asked him to do it again for an advertisement.The commercial is on YouTube already where it has 230,000 views.

2. Chris Hadfield, Canadian astronaut and soon-to-be Commander of the International Space Station talked to University of Waterloo students live from space today. It’s worth watching the whole thing, but here are some highlights. Asked to describe how he felt leaving earth, he said: “My apprehension was low. I was more concerned about not going to space than going to space because there are so many complexities leaving Earth. I had a lot of eagerness to put all that training into practice. So it was with a sense of buoyant energy and readiness that I left Earth’s protective sheath.” Asked what feature on Earth’s surface he was most surprised to be able to see, he said noctilucent clouds, which are hard to see from down here too and may be useful for tracking climate change. He took photos that he says “may be one of the most enduring legacies of our time up here.” He also offered advice for wannabe astronauts: stay healthy, get an advanced education and be able to “make big decisions when consequences matter.” Oh, and don’t be boring: “Are you going to be an interesting person to go to Mars with or not?”

3. A political science professor at West Liberty University in the U.S. recently gave his students an assignment where they were to record their reactions to various new articles and the professor listed two sources they couldn’t use: The Onion, which is a satire, and Fox News because, she says, it’s “biased.” Biased it undoubtedly is but uncovering biases is sort of the point of analyzing news, isn’t it? Robin Capehart, the school’s president, thought so, telling Inside Higher Education that the professor was wrong. “Isn’t the idea that you use what sources you can and then you have to defend the facts?” he said. “To me that’s what college is all about — being able to conduct your research and conduct your own conclusions, and the professor needs to be able to challenge it.” The rule has been changed.

4. Liberal candidate Justin Trudeau continues to travel across the country stopping on university campuses. The Queen’s Journal got a shot of him looking like a sasquatch (scroll down after the link to see it) when he spoke in Kingston, Ont. earlier this week. He spent Valentine’s Day at Trent University where 250 people showed up. One interesting policy idea he floated is a gap year between high school and university during which young people could be funded to serve their country through programs like the now-canned Katimavik, in other countries or in the military.

4. The Harlem Shake trend continues to capture attention from Canadian university students. The University of Guelph’s version has now shot to first place in the competition for the most views of any student version at 1.85 million views compared to Western University’s 1.39 million. The University of Toronto is at 334,000 and Brock University is at 200,000—not bad for late entrants.