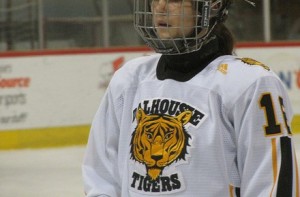 Dalhousie University is standing by its decision to suspend the women’s hockey team over an alleged hazing incident, saying the squad’s most recent version of what happened that September night is only half the story.

The team issued a statement Thursday saying it held a party to welcome new players that involved dressing up rookies in “odd clothing,” and asking them to eat sardines, hot peppers and whipped cream.

It also said the get-together at a private house included drinking games, but no one was forced to drink alcohol and no activities were mandatory.

“Throughout the evening, senior members of the team looked out for the first years to ensure that they would come to no harm,” read the two-page statement.

But university spokesman Charles Crosby said the women’s statement left out a number of details. He declined to elaborate, citing privacy issues.

“These specific actions that are outlined are still extremely selective and really only part of what happened at the party, so it’s disappointing,” he said in an interview.

The university in Halifax suspended all but first-year players from the team last week — effectively ending their 2012-13 season — after an investigation into the incident, which Crosby said involved excessive drinking, intimidation and humiliation.

Crosby has said no one was physically hurt during the party, but many players were “put in harm’s way” both physically and psychologically.

Liz Matheson, who was suspended as team captain as part of the school’s decision, said nothing more happened at the party. She said the entire team, including first-year players, agreed to the description of the events in the statement.

“I honestly don’t think Crosby has all the facts and that is one of the reasons why we are fighting this, because something we believe didn’t go well in the process of this investigation,” Matheson said in an interview.

“We weren’t taking anything off or anything,” she said in an interview.

Brooks said the university has overreacted to information gleaned from a flawed investigation.

Brooks admitted there was excessive drinking at the party, but she insisted no one was forced to imbibe alcohol.

“That would have been the only thing that was dangerous — the excessive drinking,” she said, adding that the team’s statement did not leave out any pertinent facts.

The investigation by the vice-president of student services started after a parent approached the team’s coach with concerns about the treatment of new players.

The team apologized in its statement “for any mistakes” made during the party, but lambasted the university for its handling of the situation, saying school officials aggressively and unfairly interrogated players and depicted them as criminals.

“Ambiguous questions were asked and answers were taken out of context which could have led to misinterpretation of the event,” the team said.

It also argued the punishment doesn’t fit the crime and unjustly penalizes first-year players by cutting their rookie season short.

“Through this process all 22 players, including the five first-year players who were not part of the official punishment, feel incredibly wronged by Dalhousie University,” read the statement.

“We are proud Tigers, but it’s getting harder to feel pride when the very university we work so hard for has turned around and betrayed us.”

Team members also appealed in a letter to Dalhousie University president Tom Traves to reverse the suspension, saying they are willing to take the matter to court as a last resort.

As a fix, the team suggested working with the university “to help end bullying and hazing on campus and beyond.” The team said their actions would be most effective if their season was reinstated.

Crosby said it’s a positive step, but not one that will get the team back on the ice any faster.

“There’s no quid pro quo there,” he said. “It doesn’t change the actions themselves.”

He said forfeiting the season is disappointing for the rookies, but the bottom line is that the university has a zero-tolerance policy on initiation rituals or hazing.

“While we regret what happened to the first-years, this was the right decision.”