Dangerous Harlem Shakes, a 'sit-in' & a creep at Western

What students are talking about today (March 6th) 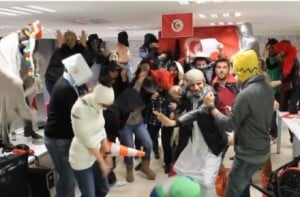 1. The U.S. Federal Aviation Administration is investigating Frontier Airlines after a group of students did the Harlem Shake mid-flight. One of them said a flight attendant gave them permission. Meanwhile, in Tunisia, the Islamist education minister has condemned a fairly PG-rated version by students there. You may recall that the self-immolation of  Mohamed Bouazizi, a 26-year old Tunisian street vendor, inspired the Arab Spring revolutions. After overthrowing their long-time president, Tunisia now has an Islamist government and the more moderate opposition leader was recently shot dead. Speaking of dangerous Harlem Shakes, the right-wing rabble-rouser Ezra Levant did one on Sun TV’s website. He even managed to get at least three young people to do it with him. The Albatross offers it in GIF form. No word yet on what the Islamists think of Levant’s gyrating, but I bet they don’t like it.

2. A student at Lakehead University is holding a “sit-in” outside the presidents’ office because a full course in Aboriginal Studies has been replaced by a partial course in the new law program. “I’ve lost a bit of weight, and certainly I think all of our grades have suffered a little bit at this point, but y’know, until there’s a resolution of the issue, there’s no question, I’m not leaving,” Sebastian Murdoch-Gibson told CBC News. The law school’s dean is defending the changes. Wouldn’t the dean know best what kind of education law students need?

3. Western University’s campus police have warned students that a man in a vehicle approached a female student and tried to get her into his car last Thursday, reports The Gazette. “The car came westbound on University Drive, pulled up with the side door of the car opened and invited the student to get into the car, saying that he was with Foot Patrol,” campus police director Elgin Austen told The Gazette. “The student, she didn’t believe that it was Foot Patrol and had some questions to ask and certainly wasn’t going to get into the vehicle. When he left, she said that he looked angry.” Austen said another female student reported a similar incident around Delaware Hall. The suspect is described as a 20- to 30-year-old male with a dark beard.

4. According to Education Week, employers are looking for graduates who have paid internships, not high grades. This may sound obvious to those of us who have graduated, but I suppose it’s less obvious to students. The National Association of Colleges and Employers in the U.S. recently found that 63 percent of students in the class of 2012 who had paid internships had at least one job offer when they graduated, compared to 40 per cent for those who had no paid internships.

5. Kate, duchess of Cambridge, may have inadvertently exposed the Royal baby’s sex during a public appearance Tuesday. And, if the speculation is correct, it’s a girl. See more here.