Tell me what’s good about the CFS, not what’s bad about its opponents

Can you feel it, boys and girls? 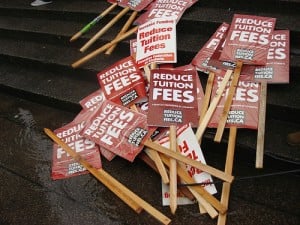 I do detect growing angst of prominent campus voices, and it’s getting chilly. Someone must have printed another article.

This time, it was the Ryerson Free Press with Manufacturing Crisis: Divide-and-conquer politics against the Canadian Federation of Students. The article, written by James Clark, breaks down the September McGill Daily story about 13 campus petitions circulating to defederate from the CFS.

Now, before I go on, I should admit that I’m not a die-hard follower of the CFS debate. I haven’t sorted through hours of meeting minutes and I can’t name the last three CFS lawsuits off the top of my head. So why am I blogging about it? Because I’m a student, and therefore, (willingly or not) connected to the CFS. As any member of a democratic society knows, citizens have the right to question the actions and behaviours of their higher-ups; I can be critical of the CFS.

1. Clark says the McGill Daily article makes vague claims, attributing discontent with the CFS to “many students” or “other organizers.”

2. Erin Hale, the McGill Daily story author, doesn’t do her research. She lets one person speak for many. (James Murphy at Trent University.)

3. Hale uses an anonymous source. Thus, no one can “challenge his claims, investigate his political affiliations, or hold him accountable for his comments.”

5. Campus defederation movements might be the product of orders from up top: the Progressive Conservative Party.

6. Those individuals pushing for defederation on campuses do poorly in campus elections.

7. They are mostly “conservative dissidents.”

8. The anti-CFS campaigners are hypocritical. They argue that students from outside CFS campuses should not participate in local campus debates. But former editor-in-chief of The Concordian, Andrew Haig, “was recently photographed at Carleton while petitioning students to leave the CFS.”

9. The movement to leave the CFS is a “generally unpopular cause.”

10. Students should unite to tackle “more pressing issues” that affect everyone.

I apologize if I missed something important. Those were the main points that I took from the article, anyway. But beyond that, here’s what I think is principally wrong with this latest CFS defense: it’s hardly a defense at all.

To deal with students like myself, who genuinely would like some answers (who knows, maybe I’ll change my mind?) I think the best pro-CFS response is a constructive one. I’d like to see an article that addresses the reasons behind the 13 petitions, including the alleged “frivolous” spending, lack of transparency, intimidation tactics, lawsuits etc.

Yes, I’m no better in “deconstructing the deconstruction.” My attempt was to illustrate just how silly the whole thing is. If my intent escaped you, I’m sorry.

So attack me personally, if you’d like. Call me one-sided, closed-minded, ill-informed or petty. But a more effective strategy would be to tell me why I’m wrong in being wary of an organization that’s obviously roused some discontent. (Sorry, is “some” too vague of a term?) Tell me what’s right with the CFS, not what’s wrong with the dissenters. After all, a constructive voice is always better received.