Democracy at UWO, hazing at Dal. & a Christian law school

What students are talking about today (January 17th) 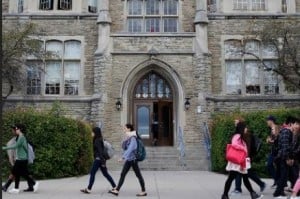 1. Gloria Dickie, editor in chief of Western University’s The Gazette has written an editorial suggesting democracy on campus is under threat after the paper was told their office, which they have occupied since 1973, is being considered as the new site of a multi-faith space—a bigger priority according to the University Students’ Council. They’ve been offered a smaller space instead. She writes that the move comes after USC proposed cutting the paper’s budget, asked to sit in on editorial meetings and considered a ban on in-person interviews. Adam Fearnall, USC president, told National Post that, “on occasion, perhaps [The Gazette] is overdramatic.” But many journalists on Twitter have sided with the editor. “Got to hand it to this year’s USC. Previous editions almost never managed to become national laughing stocks. Aim high! Purple pride!” wrote UWO alumnus and Maclean’s columnist Paul Wells. It now looks like Dickie may get her way. After committing to further discussions, Fearnall told the Gazette on Wednesday: “I was pleased that we were able to make progress on these important issues. Students rely upon the Gazette and the USC to sustain a strong student voice.”

2. A 19-year-old man and a 17-year-old have been arrested and charged with second-degree murder in connection with the death of Brett Wiese, the University of Calgary student who was stabbed at a house party earlier this week. Staff Sgt. Doug Andrus of the Calgary Police told the Calgary Herald over the course of the night the party attracted between 60 and 100 guests and that several uninvited guests who had been turned away later returned and stabbed two men, including Wiese. Andrus notes that the party was advertised over social media and warns students to avoid such public advertisements. The 17-year-old can’t be named. The 19-year-old is Mitchell William Harkes who faces charges including second-degree murder and aggravated assault.

3.Ryerson Students’ Union, supported by mandatory fees charged to students, has voted to rejoin the Canadian Peace Alliance at a cost of $600, reports The Eyeopener. The CPA has lobbied the government to oppose Canada’s involvement in Afghanistan and called for smaller military budgets. CPA members have also proposed some more radical ideas: a 2011 resolution called for members to “urge the Government of Canada to make it a priority to eliminate the military” and other resolutions suggested campaigns to delist Hamas and Hezbollah from Canada’s list of terrorist organizations. RSU’s president Rodney Diverlus told the Eyeopener the RSU has no official stance.

4. Dalhousie University’s president has upheld a decision to suspend most of the school’s women’s hockey team, reports The Canadian Press. All but the team’s rookie players were suspended Jan. 3 after the university investigated allegations of hazing at a house party in September that they say involved excessive drinking, intimidation and humiliation. Players have accused the university of overreacting to the hazing, which included asking younger players to eat sardines, hot peppers and whipped cream. They don’t deny there were drinking games, but say no one was forced to drink. The university’s policy defines hazing/initiation as “voluntary or involuntary actions that relate to subjecting newcomers to degrading, embarrassing or abusive actions or activities.”

5. The Council of Canadian Law Deans is opposed to a proposal from Trinity Western University to start a law school because the Christian institution requires faculty and students to refrain from homosexual relationships, reports the Vancouver Sun. Bill Flanagan, president of the CCLD, wrote a widely circulated letter that said: “Discrimination on the basis of sexual orientation is unlawful in Canada and fundamentally at odds with the core values of all Canadian law schools.” TWU president Jonathan Raymond argues that the “community covenant” that refers to homosexuality is “consistent with federal and provincial law.” Christian law schools exist in the United States.