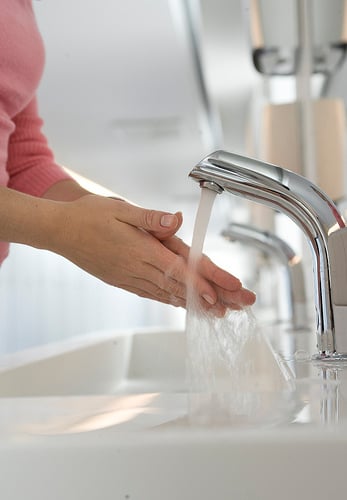 The technology is being developed by a professor of computer science at Worcester Polytechnic Institute, in partnership with the University of Massachusetts Medical School.

Health care workers will wear badges and computer hardware will be attached to soap dispensers, beds and the doors of patients’ rooms, watching for unwashed hands. If a doctor, nurse, or technician forgets to wash up before entering the room, the badge will turn red and results will be instantly sent to nurses’ stations and multiple computers.

“It can track things in real time, and those things can easily be fixed — they can wash their hands,” Elke Rundensteiner, the professor of computer science who is developing the technology, said in an interview with the Telegram.

In addition to detecting unwashed hands, the technology could also be used in situations such as massive evacuations during natural disasters, re-routing medical personnel and water during emergencies.

It’s great that the problem of bacterial infections in hospitals is being addressed, but it’s kind of disturbing to think that doctors or any health care workers need a reminder to wash their hands. I thought infections due to unwashed hands was more of an 18th century kind of problem, before the invention of hygiene. At least those surgeons didn’t know any better. What excuse do today’s doctors have?