Does Victoria have the dumbest students?

Bandits make off with barbecue chips 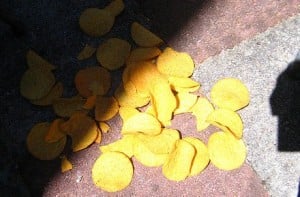 Is it just me, or is there something extra dumb about students in Victoria, B.C.?

Two of them are facing break and enter charges after they stole a bag of Zellers-brand barbecue potato chips from a houses’ garage around 3:15 a.m. on Tuesday, reports the Times Colonist.

The home-owner’s Chihuahua alerted her to the crime in progress. Officers from three different detachments then converged to hunt down the thieves. Police dogs found a trail of munchies leading to some bushes. Hiding there were a pair of drunken and apologetic female students.

This isn’t the first time young people in Victoria have been charged with unimaginably stupid crimes.

In September, a 19-year-old woman for was arrested after she drove to a police station to bail out her boyfriend no more than half-an-hour after he was picked up from a University of Victoria party for drinking underage. She told the cops a taxi had dropped her off. Surveillance footage showed otherwise. She then tried to drive off but was pulled over and failed a breathalyzer test.