Dollar for dollar, a B.A. is better

Grad studies are on the rise, but the payoff in cash is small 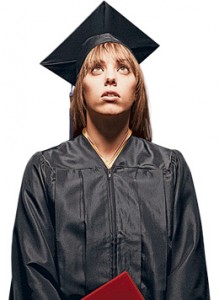 More Canadians are pursuing graduate studies than ever before. Even prior to the recession—university enrolments tend to spike during economic downturns—a significant shift was already under way: according to Statistics Canada, 32 per cent more people had master’s degrees in 2006 than in 2001, and 30 per cent more had doctorates. But, as a recent study by the C.D. Howe Institute shows, going to grad school doesn’t always pay.

While the desire to pad the mind, rather than the wallet, is what motivates many of those who get advanced degrees, it may still come as a surprise that a simple bachelor’s is a far more fruitful economic investment. According to “Extra Earning Power: The Financial Returns to University Education in Canada,” throughout their careers, men can expect an average annual return (after taxes) of 12 per cent on what they paid for tuition, books and living expenses in undergrad; for women, who have less lucrative opportunities with just a high school diploma, it’s 14 per cent. For master’s degrees, meanwhile, the annual rate of return drops to 2.9 per cent for men, and five per cent for women. The payback is smaller still for Ph.D.s: women can anticipate a 3.6 per cent return, while men actually emerge in the red.

As author François Vaillancourt explains, though grad school often unlocks added earning potential, due to “very high” costs of tuition, living expenses and income lost, master’s degrees and Ph.D.s don’t necessarily translate into bigger bank accounts. For society, the costs are even more significant. When men get master’s degrees, government, taxpayers and universities actually take a financial hit. But despite negligible and, in some cases, negative value to society, Vaillancourt points out that there’s more to determining worth than dollars and cents. “One thing we cannot measure is the content of work,” he says. However, in the case of degrees for which taxpayers, in the big scheme of things, seem to be carrying the load, he suggests, “Perhaps society should ask itself, ‘Why?’ ”