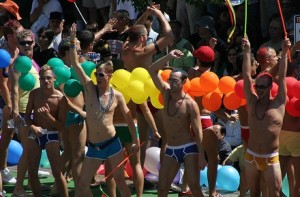 When I heard about Kwantlen University Professor Shinder Purewal and his tweet saying that the Vancouver Pride Parade should be banned, I didn’t think much of it. Professors, like everyone else, have the right to be wrong.

But Purewal’s more detailed comments in the National Post were so outrageous that something has to be said by way of rebuttal.

In the interview, Purewal moderates his position to say that he doesn’t want the whole parade banned, but he does want to see an end to the “explicit sexuality” of the event. His main reasons are, first, that publicly sexual behaviour is inappropriate for children, and second, that gay men and women ought to celebrate their rights, but should do it behind closed doors, not “openly, in the streets.”

Children often provide convenient cover for those made uncomfortable by alternate sexualities. One can always say, “I don’t have a problem, but think of the children.” But why should gay sexuality be so harmful for children? What kind of pure wall does Purewal think kids have to be hidden behind?  In any case, the kinds of things that go on at major Pride events are no secret. If you don’t think it’s appropriate for your kids, don’t take them.

But the really maddening part of Purewal’s argument is his suggestion that heterosexuals don’t behave so explicitly, so why should gay men and women at pride do so? Well, in fact, straight people display their sexual orientations in public all the time, and they do so without fear of being verbally abused or physically assaulted. The majority doesn’t have to make noise about being the majority because they are the majority. We don’t need a White History Month in Canada because the contributions of white Canadians haven’t been ignored. By the same token, many gay men and women make an issue of their sexuality in a way that heterosexuals don’t because straight people didn’t have to hide for centuries. Straight people didn’t have to worry about losing their friends or their jobs, or being declared mentally ill, or, in extreme cases, going to prison because of their sexuality. So if the sexuality on display in your local Pride parade bothers you, weigh that against the hundreds of years of oppression, oppression that is just now beginning to lift.

But what about the professor’s claim that other groups have fought for their rights and didn’t make a big deal of it? As Purewal said to the Post, “Women had to fight for the right to vote and the fight to be recognized as persons. They didn’t go out walking naked and saying ‘Look, we are women, see us.’” Actually, feminists have done exactly that, but the faulty parallel here is still stark. Gay men and women flaunt their sexuality during Pride because it was their sexuality that they once had have to conceal. The real parallel would be to say that women should vote but not “flaunt” their political involvement. After all, we wouldn’t want children seeing women voting, now, would we?

Purewal claims he is not homophobic, but if he is truly a champion of gay rights as he claims, he should reconsider his view. Canada has come a long way on gay rights in a relatively short period of time.

We should all be Proud.