So it’s January and you just got your bank account topped off with this semester’s student loan. You’ve been told to draw up a budget and stick to it, but budgets are for poor people and with all that new loan money, you’re rich, right? So it’s time to go shopping!

Blowing your budget and then ending the semester broke and hungry is almost a rite of passage for university students. There are so many temptations out there, particularly at the beginning of a semester, when everyone is going out and partying and many people aren’t seriously hitting the books yet. 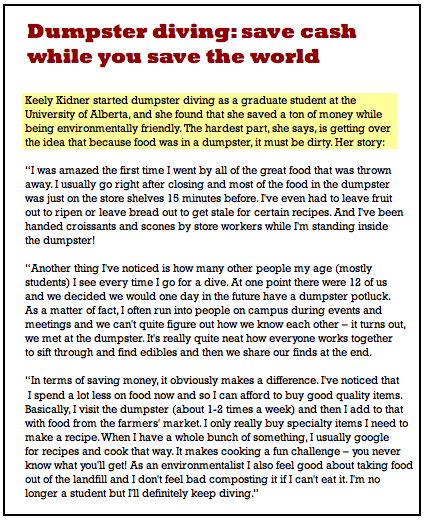 Maybe you have someone who will bail you out if you spend all of your money, but on the other hand, maybe that someone will surprise you to teach you a lesson. The lesson is this: being so broke that you can’t afford food is no fun; it’s easier to plan a budget and stick to it from the beginning.

Get a load of this confession:

“When I was in my first year of college, I’m not sure that I realized what debt was, or that all this seemingly free money pouring into my account could actually run out. Student loans were a given, and in my mind, they were a right. So when that fat cheque came in the mail in September, it was shopping time. The day it arrived, a friend and I went to Metrotown and splurged on new clothes, jewelry and — of course — a big bottle of gin. In that first semester I felt richer than I had ever been because I had so much scholarship- and loan-money in my account. My spending habits reflected that feeling: I went out whenever I felt like it, ate at restaurants, and bought whatever I desired. I didn’t realize that the money had to pay for tuition next semester and feed me until April.

“I ran out of money in the end of February. I actually didn’t see it coming because my feeling of wealth was so complete that I didn’t pay attention to my account balance. I was simply shopping one day and my debit card was rejected: insufficient funds. I panicked. How was I going to eat and pay my rent for two more months?! But I figured that someone else would bail me out. I was still a kid, right? I called my mom, and she – wisely, I now realize – gave me $50 and told me to figure it out myself.

“I freaked. But I figured it out. I stopped going out or buying anything extra. I cut down my food to coffee for breakfast, rice and noodles at the cafeteria at school for lunch ($2), and for dinner I raced from my last class to the pub nearby to get in my order for 10-cent wings before happy hour came to an end and the price skyrocketed to 25-cents. I also racked up my credit card to pay for my rent, which took me a year to pay off. I quit taking taxis and exclusively used my bus pass.

“I would have made it through until I returned home for the summer — if everything had just gone according to plan. But, as I learned the hard way, things rarely do. Disaster struck: a transit strike. I could no longer commute between my apartment in the suburbs and my college in a different suburb. So I, along with some other unfortunate souls, began sleeping at school by hiding in the bathroom when the janitor locked up and curling up for bed in a practice room in the music department. We showered in the gym and basically didn’t leave campus for weeks. In the end, my mom bailed me out, but not before I learned important lessons about budgeting not only enough to get me through, but also for emergencies.”

Crazy, eh? What kind of a fool would get themselves into a mess like that? It was none other than my co-writer, journalist Erin Millar.

I’m as shocked as you are at such a lurid tale of irresponsibility. When I went to university, I was a good boy who saved his wages from his summer job and made them last for the whole school year. I lived at my parents’ house in the suburbs to save money and I never had any budget crises. It also helped that my parents paid for my tuition and my books, but I still take full credit for being utterly unimaginatively and humourlessly financially responsible.

We asked around, and it turns out that budgetary crises are very common among students who don’t live with mom and dad. The results can be dire. We’ve heard stories from students and former students about what they did to get over their budget crisis that range from the comical to the degrading to the dangerous to the criminal. 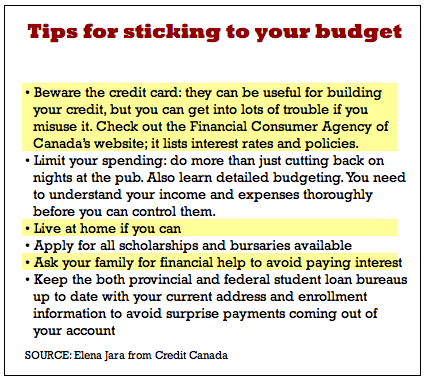 I’m sure that some of our storytellers regard those times as dark episodes from their past that they’d rather forget. Unfortunately for them, the internet has a long memory, and their stories are way too entertaining not to share with you, our readers:

Mark from Memorial got his hair cut by a friend in a university bathroom stall to save $10!

Lina from Concordia diluted her milk with water to make it last longer!

William from Mt. Allison stretched his grocery budget by having nothing but concentrated orange juice for dinner!

Sheena from Memorial economized by stealing toilet paper from a campus bathroom!

Amanda from Simon Fraser University, who is quite thin to begin with, almost stopped eating entirely at the end of one semester, subsisting some days on a cup of bubble tea, which certainly wouldn’t be my choice as being the best nutritional bang for a buck. Her malnutrition contributed to a severe bout of late-semester depression, which forced her to quit all of her extra-curricular activities!

Jodie from Australia stole plates and cutlery from the university café and sold them as “complete sets” on eBay. Then she spent the money on beer and still couldn’t afford food, so she resorted to cutting slices of bread in half to make sandwiches (I’m in awe of her skill with a knife) and stealing gas from the boat her neighbour left parked on the driveway!

Another former student (who doesn’t want his name or university revealed for reasons that will soon be apparent) stole food from the restaurant where he worked until he figured out a way to hack into the computer system and embezzle money!

This is an advice column, so we are required to draw a lesson from these stories. Here it is:

A: Sticking to your budget in the first place.