Let's save our public condemnation for those with malicious intent 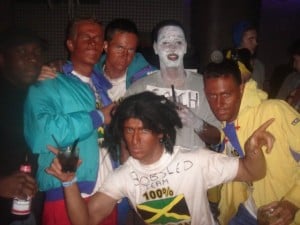 They’re students. They painted their faces. Someone called “blackface” and lots got ticked off.

They were called racist, ignorant, foolish and insensitive, and apologies were demanded all around.

The four boys darkened their skin (and one lightened his) for Halloween. They dressed as the “Jamaican Bobsled Team” for a college pub event, and won best costume. But they didn’t have much time to celebrate. David Topping called them out on his Torontoist blog, saying they were manifesting “blackface.”

Then it took off.  Hundreds of responses, one townhall meeting and a handful of media reports later, and the issue remains as contentious as ever. (For even more details, click here.)

But do these boys deserve all the contempt that’s come their way? Are they guilty of blackface, or has the issue been blown out of proportion?

I’d say blown out of proportion.

Mind you, I don’t want to downplay the fact that the get-ups genuinely offended certain individuals. I can try to empathize, but I know I will never totally get it. Still, I don’t think that means I have to remain relativistic (as some have argued), especially on something so litigious.

So, was this blackface?

The word’s a bomb. I don’t know who first dropped it here, but others seem to have picked it up without regard to its connotative weight. And I think it’s been misapplied.

Blackface is a very specific type of makeup worn in the 19th century by white actors playing black characters. Blackface makeup exaggerated racist stereotypes, contributing to overall attitudes of intolerance. I think saying these U of T students wore “blackface” is a bit of a stretch. Just because something looks similar, doesn’t mean it’s the same.  For example, if someone wears a flashing star broach, it doesn’t mean she’s making fun of Jews in Nazi-occupied Germany. Maybe she just likes tacky jewelry.

And speaking of which, the Black Student Association at U of T has compared this “blackface” incident to wearing Nazi regalia. Again, I think this is a weak parallel. Nazi regalia reflect a specific ideology of hate. The makeup these boys wore doesn’t convey a particular set of ideas. Only through extrapolation has it been connected to blackface. The boys themselves stated they only painted their faces to look like the characters in the movie.

The boys were dressed as the “Jamaican Bobsled Team,” characters from the movie Cool Runnings. They weren’t dressed as “Jamaicans” or “black people” or “white people wearing blackface.” They were specific personalities from a popular movie. Can we really call them racist?

Well, those that aren’t are at least calling them insensitive. Many have argued that although they were ignorant to the historical wounds they were reviving by darkening their faces, they were wrong just the same. The casualness with which they slapped on the makeup speaks to their “social ignorance” and “white privilege,” many have asserted.

Maybe so. I’m not about to debate that. But I do think there’s another way to look at it. Firstly, I think it’s important to emphasize that the boys didn’t seem to be motivated by malice; they didn’t think anyone would be offended by what they did. Whereas 19th century blackface exploited racist stereotypes, these boys were just trying to look like movie characters. Secondly, I think it speaks volumes about our progress as a society that these boys could darken their faces with such nonchalance. Doesn’t it say something about race relations that we’re not preoccupied with the differences between us? Doesn’t the fact that we’re not constantly worrying about offending one another show that we’re starting to see each other as one in the same?  Maybe not, and you can disagree with me, but I think there are at least some positives can be drawn from this messy situation.

Regardless, I definitely think the issue has been mishandled. If it’s true that the boys meant no harm (and I think that’s been pretty much agreed upon) why make a public spectacle? I understand it’s a good way to educate people about the historical context of darkening one’s face, but it seems like these boys have taken the fall. And they’ve fallen too hard. If we really feel so compelled to call people out, let’s save the public condemnation for the malicious intenders, and quietly tell the inadvertent offenders to go wash their faces. Or maybe, (and in my opinion, preferably) just take a step back, pause, and see the issues for what they are.