'Just because you regret a one night stand...' say copycats

An edgy marketing campaign developed at the University of Alberta that aims to prevent sexual assault by focusing on changing the behaviour of perpetrators (usually men) rather than victims (usually women) has been co-opted by someone or some group trying to shift the blame back to women.

Sexual Assault Voices of Edmonton, a coalition that fights rape, designed the “Don’t be that guy” social marketing campaign. Their materials have blunt messages like, “Just because she’s drunk doesn’t mean she wants to f**k,” and, “It’s not sex when she’s wasted. Sex with someone unable to consent = sexual assault.” They’re seen as so effective that they’ve been used in campaigns as far away as Australia.

Lise Gotell, Chair of Women’s & Gender Studies at the University of Alberta and SAVE member, says the “upsetting” copycat posters showed up in downtown Edmonton and on campus this weekend.

“It’s really problematic that a social marketing campaign meant to prevent rape has been perverted in this way,” she says.

Gotell says the anonymous counter-campaigners are, “perpetuating this myth that false allegations are widespread when they’re not.” She says research generally puts the rate of false allegations between two and eight per cent. One recent study from Britain showed it’s under one per cent. 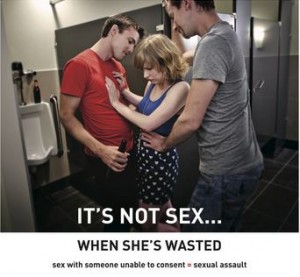 A genuine "Don't be that guy" poster (SAVE)

Sexual assault, on the other hand, is a widespread and very under-reported crime, in part because women fear they won’t be believed or because the justice system won’t support them, says Gotell.

“It’s very common behaviour for young men to use alcohol to facilitate sexual assault,” says Gotell. “This is still understood to be a normal kind of behaviour and that’s very problematic.”

Women drink too, “but it’s problematic to be focused on the behaviour of victims,” she says.

SAVE will meet Monday to decide what course of action to take if the perpetrators are caught.

FILED UNDER: Crime Don't be that girl Don't Be THAT Guy sex sexual assault University of Alberta