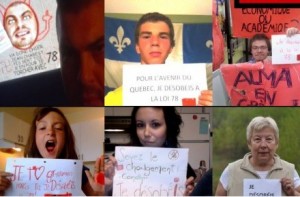 A demonstration in Montreal on Tuesday to mark 100 days of class boycotts over tuition was calmer than expected. Though some estimate crowds in the hundreds of thousands, Montreal Police arrested just over 100 people.

They did not—as was widely reported this morning—use a new law, 78, that makes demonstrations of more than 50 people illegal if organizers haven’t submitted an itinerary at least eight hours in advance to police.*

CLASSE, the most vocal student group behind the protests, also known as the “student strike,” refused to tell police of its plans.

CLASSE argues that Law 78 is unconstitutional. Quebec constitutional lawyer Julius Grey told the Montreal Gazette on Tuesday that he agrees. He says sections of the law could be struck down if a challenge reaches The Supreme Court of Canada before the law expires in July 2013. “It prevents spontaneous demonstrations, which is part of the freedom to demonstrate,” he explained.

Police also used a new bylaw on Tuesday that prevents demonstrators from wearing masks. The arrests began after projectiles were thrown at police officers, according to the police Twitter feed.

Support for the student movement, symbolized by red squares of fabric, is growing outside of Quebec. Demonstrations in solidarity were held New York, Paris, Toronto, Calgary and Vancouver, reports The Canadian Press. Meanwhile, roughly 200 activists, mostly from the Toronto area, signed a letter encouraging Ontario students to start a similar uprising in the fall.

Support is growing among unions outside of the province. The executive of the Canadian Association of University teachers, the professors’ union, will vote on Wednesday about whether to support demonstrators with cash, reports The Globe and Mail.

Sid Ryan, president of the Ontario Federation of Labour, told The Toronto Sun that it may be time “to get into the streets of Ontario and start the same kind of movement that they have in Quebec to demand that tuition be lowered and that we start working towards free university.”

As of Friday, student associations representing about 25 per cent of Quebec students continued to declare themselves “on strike” over Premier Jean Charest’s plan to raise tuition $1,778 over seven years.

In a move reminiscent of Occupy Wall Street, 3,500 people who oppose Law 78 have posted photos and messages on a Tumblr website, the name of which translates to “Someone Arrest Me.”

*Editor’s Note: This post was corrected at 12:30 p.m. EST after Montreal Police spokesperson Anna-Claude Poulin confirmed that Bill 78 has not yet been used by Montreal Police, which I included based on a report from The Canadian Press. In fact, the arrests were made under the Criminal Code of Canada. I regret the error and thank the commenter who pointed it out.