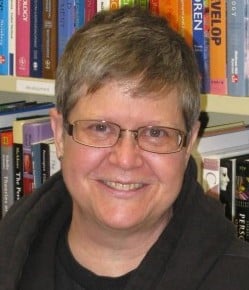 University of Alberta psychology professor Connie Varnhagen doesn’t always know what students will learn when they enter her classes—and she likes it that way. She wants them to discover knowledge on their own.

Here’s a story that shows what she means. In one class, she instructed her students to come up with a test to identify which of her two cats has a worse case of cerebellar hypoplasia, a brain disorder that causes the poor felines to tumble over when they walk. While trying to come up with tests, the class observed that both cats are left-handed. That was news to Varnhagen. Exciting news. “Most cats are strongly right-handed,” she says. Could left-handedness be related to the disease? The students jumped into the research literature to find out.

The result? “They developed better critical thinking skills and scientific literacy because it was something they discovered all on their own,” says Varnhagen. One went on to veterinary school and studied even more about it.

Such is the power of “discovery learning,” the method to Varnhagen’s occasionally mad classes. She designs her lectures to create the conditions for discovering knowledge about a subject through hands-on activities. Research shows that this type of learning lasts longer, she says.

Sometimes discovery learning means doing things “that risk management shouldn’t know about,” Varnhagen jokes. “If you come into our classroom, you see holes in the ceiling and stains on the rug from blowing copper off of pennies,” she says of the interdisciplinary first-year science course she and other professors jointly teach. “It’s just like a gigantic playground—within reason.”

Discovery learning can take simpler forms too. One tool that Varnhagen uses frequently is interactive clickers. She poses a multiple-choice question and students then explain why they got a, b, c or d. It allows them to discover how their peers came to an answer—often by a different route.

Varnhagen also turns her students onto online tools of discovery like The Great Canadian Psychology Website. There, students can learn about Wilder Penfield’s Montreal Procedure for treating epilepsy. Penfield pioneered brain surgery where small parts of the brain are stimulated with the patient awake, so that the patient can help the surgeon avoid damaging vital regions.

“Sure, I could show them maps of the brain,” says Varnhagen, “but that’s boring.”

Discovery learning is also well-suited to field trips. Varnhagen once took a class to Alberta’s Athabasca Falls and saw the perfect opportunity to teach the waterfall effect, which demonstrates how the neurons that interpret what we see are set up in opposing pairs. Basically, looking at water rushing down tires out the neurons coded for downward motion, so when we look away at the trees they appear to grow bigger, because the neurons coded for sideways motion aren’t as tired.

“[The students] went ooh, aww, this is cool,” says Varnhagen, “and then a whole bunch of tourists came up and the students felt they had to stop and explain it to the tourists.” When someone eagerly shares his or her new discovery, that helps reinforce their own learning, she says.

That eagerness is the essence of discovery learning, says Varnhagen. “I could talk about a concept until I’m blue in the face. But until you experience it, you’re not really going to truly understand.”

Connie Varnhagen is one of 10 new 3M National Teaching Fellows in 2012 who have agreed to share their secrets to successful teaching. Click here to read more about Canada’s Best Teachers.