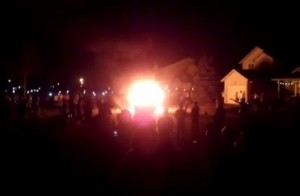 After the St. Patrick’s Day riots in London, Ont. caused an estimated $100,000 damage and led to at least 13 arrests, the president of nearby Fanshawe College announced this morning that his school has begun its own investigation into student conduct.

Fanshawe has already temporarily suspended eight students who are believed to have been involved, president Howard Rundle told reporters on Monday. Fanshawe’s Code of Conduct allows for academic penalties when off-campus actions might impact the health and safety of others.

The riots on Fleming Drive, where many students live, started on Saturday evening after dark. As many as 1,000 people crowded around a flipped-over and burning TV news truck. Some onlookers hurled bricks, beer bottles and two-by-fours at firefighters and the more than 50 police on scene.