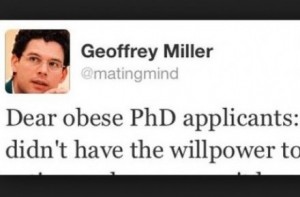 Another week, another professor has sparked a virtual brou-haha on social media. Enter Geoffrey Miller, a visiting professor at New York University, who recently wrote the following tweet:

As you might imagine, cyberspace went nuts, calling Miller lots of nasty names, calling for his resignation, and hinting darkly at the possibility of legal action. Many outlets then took a closer look at some of Miller’s other public statements including the time he wondered whether women might be wise to schedule job interviews while they are ovulating because, he said, they are more sexually attractive then. There are also renewed questions about his ideas and involvement in Chinese eugenics—as in this article which seems to equate wealth with intelligence, and ends with an allusion to Aldous Huxley’s Brave New World—Miller seems unaware of the fact that the novel actually condemns biological manipulation for social benefit.

NYU has noted that Miller deleted the tweet, apologized for it, and now considers the matter closed. Somewhat confusingly, Miller seems to have both apologized unreservedly and also claimed that the tweet was part of a social experiment.

Of course, Miller’s tweet was a particularly nasty jab at those who may like an extra slice of pizza once in a while. For one thing, it’s obviously false, since a great many carb-loving scholars do, in fact, finish their PhDs — myself included. Indeed, even a short period of reflection would convince most people that a lack of discipline in one area does not mean a lack of discipline in all facets of life, or even any other facet of life, necessarily. By Miller’s logic, one could conclude that no smokers could earn PhDs (if you don’t have the willpower to stop lighting up…), or TV watchers (if you don’t have the willpower to turn off the boob tube…). In fact, only those who were absolutely well-disciplined in every area of life would be able to finish their degrees. And how many can claim to have that level of  self-control?

But what really makes Miller’s tweet unusually hurtful, even by the very low standards of Twitter, is that hashtag. “#truth.” Why add the hashtag? My interpretation is that Miller, even as he wrote it, knew that it would offend people, and knew why, but he tweeted it anyway, thinking that even though it will upset the tubbies, it is the truth and he wasn’t going to be cowed by the politically-correct fatties. Click send. In other words, Miller’s claim that his tweet was “impulsive” rings a bit hollow. It may very well be, as they say in political circles, that Miller got caught saying what he actually thinks.

All that said, I can’t bring myself to join the chorus of those who say they want this fathead’s head—or at least his job. To be sure, Miller was speaking to university issues, and it certainly presents a PR nightmare for his home university in New Mexico who will now have to spend a long time explaining that they do not, in fact, reject applicants for being too long in the waistband.

Moreover, it’s unfortunate that professors aren’t more careful with social media. But if we were to fire every professor who offended someone on the internet, we would have very few professors left. Or at least very few good ones. Indeed, if we start turfing profs who can be shown to have made controversial statements, we open the gates to a constant flood of complaints from those with a vendetta or an agenda or just too much time on their hands. It’s happened before: the classic case is that of Bertrand Russell, one of the great minds of the last century, deemed unworthy to teach at the City University of New York after a vicious smear campaign led by a local bishop. My own Dean has received complaints about me for things I’ve written in this very blog.

Fire every professor whose public statements have aroused anger and we will end up with some combination of the following:

1. Professors living in constant fear of saying the wrong thing.
2. Professors refusing to speak in public.
3. The best and brightest finding other career paths.

None of these is acceptable. Even if it means I have to put up with people making fun of me for being fat.

Does Geoffrey Miller deserve to keep his job? It’s not for me to say. Should he, in fact, keep his job? Yes. Because, however he feels about people of my size, this is bigger than him.

And that’s the #truth.