Trains muscles and competes to get insider's perspective 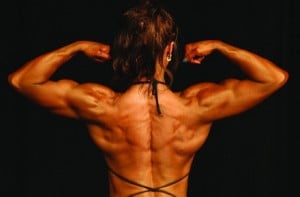 A University of Alberta professor went undercover to understand the women’s body-builder psyche by becoming a body-builder herself. After competing in the Northern Alberta Bodybuilding Competition on June 4 — complete with purple bikini, blond hair extensions, fake nails, four-inch heels and a spray tan — she revealed herself to her surprised colleagues, reports to the Edmonton Journal.

Lianne McTavish is a feminist and teacher of the history of art, design and visual culture who has written about women’s bodies throughout history and across cultures. During her past year of training, she wrote about the experience of body building on a blog using the pseudonym Feminist Figure Girl under the headline Look hot while you fight the patriarchy. That blog will form the basis of a new book she plans to write a book.

McTavish told the Journal that she feels out of shape since the “ritualized test” of the competition, but she doesn’t miss the hardcore dieting. She says she would wake up famished around five in the morning and would have trouble concentrating on her academic work because of the hunger. Planning and consuming her six small meals per day consumed up to 30 hours of her week, she says.

But it wasn’t all pain. She also felt a strong sense of accomplishment from preparing and competing. She also found that the local bodybuilders were very welcoming and supportive.

Colleague Anne Whitelaw told the Journal that she is intrigued by what this means for feminist scholarship. “[McTavish] values the work that other women are doing and have done to participate in this competition,” she said. “I appreciate the seriousness [of that], because I think it would be very easy, from a feminist standpoint, to just dismiss it as adopting and perpetuating a stereotype.”

Although McTavish won’t compete again, she does hope to become a volunteer trainer for women at a local shelter, who might benefit from the same type of sense of accomplishment that she felt.